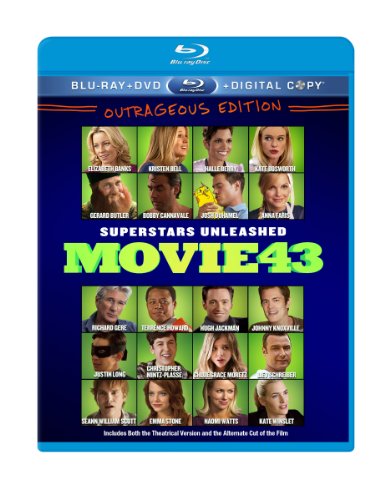 Twentieth Century Fox Home Entertainment will release on Blu-ray Movie 43 (2013). The Farrelly brothers are among the creators of this compendium-style comedy filmed in the style of 1970s sketch films such as Kentucky Fried Movie and Groove Tube. Street date is June 18th.

Exact technical specs and supplemental features to be included with this upcoming release are yet to be detailed.

Disclaimer: Affiliate links are contained in this post. This means when you click a link, and purchase an item, Movie House Memories will receive an affiliate commission. Advertisers and Affiliate Partnerships do not influence our content. See our Terms of Use about the inclusion of affiliate links on this site for more information.
April 6, 2013
1 minute read
Show More
Back to top button
Close
Close