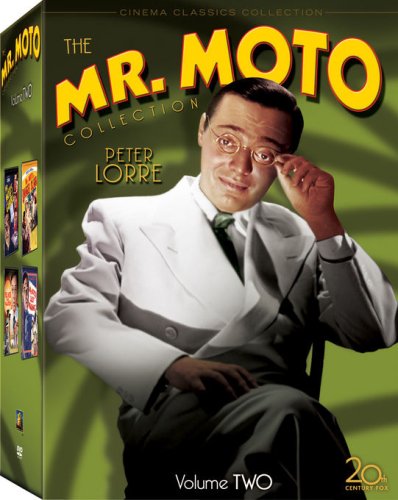 After someone poisons the #1 heavyweight contender during a bout, Moto knows that identifying the gambler who placed large bets against him is the key to solving the murder.

A criminal organizations uses Puerto Rico to smuggle inexpensive contraband diamonds from South America into the United States. After they murder a special investigator, Moto investigates.

A young archaeologist discovers the crown of the Queen of Sheba, and returns with it to a San Francisco museum where they put it on display. Now an international pair of criminals, a San Francisco gangster, and a super criminal want to steal. Mr. Moto postpones his vacation while he deals with the threat.

A Japanese man disembarks a ship at Port Said in Egypt. Criminals thing he’s Mr. Moto of the International Police. They immediately kill him. The real Mr. Moto is already in Port Said and busy investigating a conspiracy against the British and French governments. The dead man was his colleague, impersonating him to throw the criminals. Moto recognizes one of the conspirators as a British Secret Service agent, and he and the gang have mined the harbor in preparation for the arrival of the French fleet. Their aim is to blame the British to start a second World War.

Disclaimer: Please note that this post contains affiliate links. This means when you click a link and purchase an item, Movie House Memories may receive an affiliate commission at no additional cost to you. This bit of compensation helps keep content on our site free of charge to its readers. Advertisers and Affiliate Partnerships do not influence our content. See our Terms of Use about the inclusion of affiliate links on this site for more information.
February 9, 2021
1 minute read
Show More
Back to top button
Close
Close