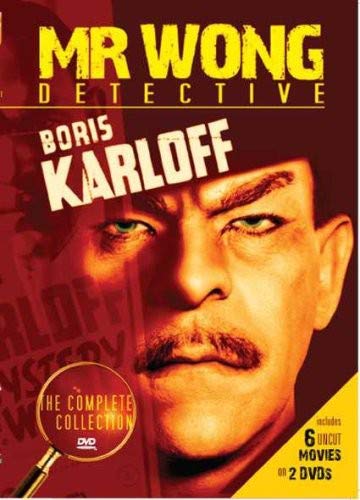 The two-disc DVD contains the five films starring Boris Karloff in the titular role and one starring Keye Luke.

Black and White – 69 Minutes – Not Rated
In Mr. Wong, Detective, someone murders a chemical manufacturer after he asks detective James Wong to help him. Wong investigates his death, and two subsequent murders. His investigation reveals an international spy organization who’s out to steal the formula for a poison gas being the first victim’s company is developing.

Black and White – 68 Minutes – Not Rated
The Mystery of Mr. Wong takes place when someone steals The Eye of the Daughter of the Moon, a large sapphire, in China and smuggled it into the US. A wealth man named Richards winds up dead after receiving the cursed stone. Someone shoots him during a game of Indications at a dinner party that detective Mr. Wong attends. While his secretary, Peter Harrison, seems to be the murderer, the detective and Captain Street’s investigation reveals many secrets and a surprise murderer. Read the full summary…

Black and White – 71 Minutes – Not Rated
In Mr. Wong in Chinatown, a pretty Chinese woman arrives to the San Francisco home of detective James Lee Wong. As she waits, someone shoots a poisoned dart into her neck and kills her. The only clue to the death, and the woman, is a note with the name Captain J scribbled onto it as she dies. In time, we learn she’s on a mission to buy and smuggle airplanes into China. Soon, Mr. Wong finds two captains with the initial J; however neither man is of any help to the good detective. Read the full summary…

Black and White – 68 Minutes – Not Rated
The Fatal Hour begins after someone murders Captain Street’s BFF, Dan Grady, he enlists the help of Chinese detective James Lee Wong to solve the case. The investigation leads him to discover an underground smuggling ring on San Francisco’s waterfront. Along the way, several more people find themselves dead from unnatural causes.

Black and White – 68 Minutes – Not Rated
In Doomed to Die, someone shoots shipping magnate Cyrus Wentworth in his office. The death coincides with some trouble between him and his daughter’s fiance, Dick Fleming. After Captain Street arrests Dick for the murder, intrepid reporter, Bobbie Logan, asks Mr. Wong to investigate further; convinced Fleming is not the real murderer.

Black and White – 62 Minutes – Not Rated
In Phantom of Chinatown, Detective James Lee Wong (Keye Luke) investigates the death of a famous explorer named Dr. John Benton. His last words of Eternal Fire are the only clue the detective and Captain Street have to go on. After Benton’s secretary reveals the doctor’s dying words refer to a scroll telling the location of rich oil deposits, the men begin their search for the killer among Benton’s closest associates.

Disclaimer: Affiliate links are contained in this post. This means when you click a link, and purchase an item, Movie House Memories will receive an affiliate commission. Advertisers and Affiliate Partnerships do not influence our content. See our Terms of Use about the inclusion of affiliate links on this site for more information.
March 28, 2020
2 minutes read
Show More
Back to top button
Close
Close