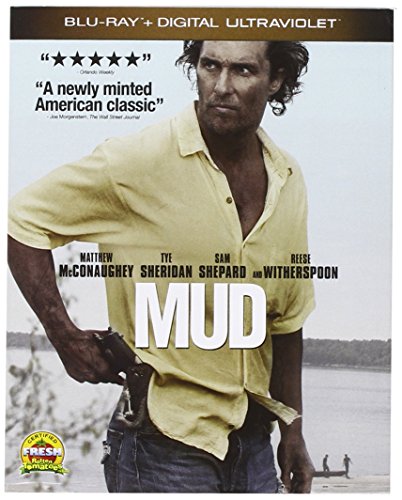 Lionsgate and Roadside Attractions have announced the release date for the Blu-ray of the drama Mud. The film is written and directed by Jeff Nichols and stars Matthew McConaughey, Tye Sheridan, Michael Shannon, Jacob Lofland, Sarah Paulson, and Reese Witherspoon. Mud will be available for purchase in stores and online beginning on August 27th.

Mud is the story of an improbable friendship between 14-year old Ellis (Sheridan) and a charismatic fugitive named Mud (McConaughey). Exploring the nearby Mississippi river, Ellis and his best friend (Lofland) discover a deserted island where they encounter Mud, a dirty, desperate yet oddly compelling stranger. Mud is on the run for a crime of passion, and bounty hunters are closing in on him. Moved by the romantic notion of his story and intrigued by the promise of a great adventure, the boys conspire to aid Mud in his escape and reunite him with the love of his life, Juniper (Witherspoon). Sam Shepard and Joe Don Baker co-star in the film.

Mud was released in the United States in April of 2013 and has grossed over $8 million at the box office to date. The film had its world premiere at the Cannes Film Festival in 2012, where it was nominated for the prestigious Palme d’Or Award.

Lionsgate and Roadside Attractions have not revealed any of the technical specifications or special features for the Blu-ray as yet.

Disclaimer: Affiliate links are contained in this post. This means when you click a link, and purchase an item, Movie House Memories will receive an affiliate commission. Advertisers and Affiliate Partnerships do not influence our content. See our Terms of Use about the inclusion of affiliate links on this site for more information.
May 17, 2013
1 minute read
Show More
Back to top button
Close
Close