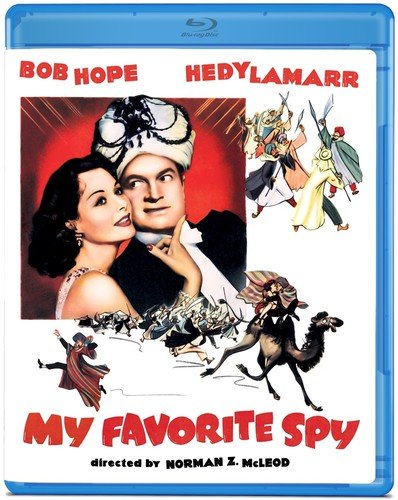 Olive Films has announced the addition of the comedy My Favorite Spy to its upcoming slate of Blu-ray releases. The film was directed by Norman Z. McLeod and starred Bob Hope, Hedy Lamarr, Francis L. Sullivan, Arnold Moss, and John Archer. My Favorite Spy will be available for purchase online and in stores beginning on August 20th.

While on his way to Tangier to purchase a microfilm containing important war secrets, foreign spy Eric Augustine (Hope) is wounded and captured by the authorities. Burlesque comedian Peanuts White (also Hope); a dead ringer for Augustine is recruited by the government to take over Augustine’s mission. He’s briefed in the role of the suave and romantic Augustine, dressed to look exactly like him and is thrust into the world of espionage and international intrigue. In Tangiers, he meets Lily Dalbray (Lamarr), Augustine’s sweetheart, a beautiful spy working with Karl Brubaker (Sullivan) mastermind of the spy ring. My Favorite Spy was released in December of 1951.