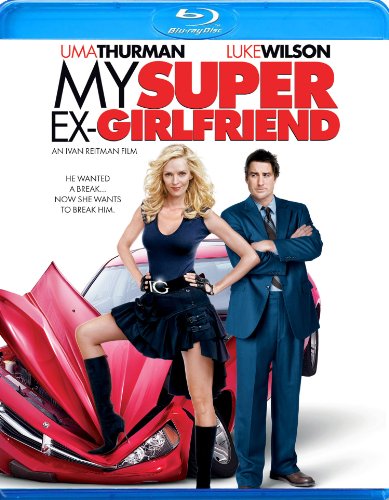 Anchor Bay has announced that they are releasing 20th Century Fox Home Entertainment’s My Super Ex-Girlfriend onto Blu-ray this May. The film was directed by Ivan Reitman and starred Uma Thurman, Luke Wilson, Anna Faris, Rainn Wilson, Eddie Izzard, and Wanda Sykes. My Super Ex-Girlfriend will be available online and in stores beginning May 28th.

Everyone’s had a painful parting of the ways with a romantic partner. We pick up the pieces and move on. But for one New York guy (Wilson), it’s not going to be so easy. When he breaks up with his girlfriend he discovers his ex is actually the reluctant superhero, G-Girl (Thurman). A scorned woman, she unleashes her super powers to humiliate and torment him in director Ivan Reitman’s superpowered romantic comedy.

My Super Ex-Girlfriend was released in July of 2006 and grossed over $60 million in worldwide box office.

Disclaimer: Affiliate links are contained in this post. This means when you click a link, and purchase an item, Movie House Memories will receive an affiliate commission. Advertisers and Affiliate Partnerships do not influence our content. See our Terms of Use about the inclusion of affiliate links on this site for more information.
April 22, 2013
1 minute read
Show More
Back to top button
Close
Close