Faber College has one frat house so disreputable, it takes anyone. It’s rival is a white-bread frat full of rich young men who are so sanctimonious that no one can stand them except Dean Wormer. The dean enlists their to get the boys of Delta House off campus. The dean’s plan comes into play just before the homecoming parade to end all parades for all time. 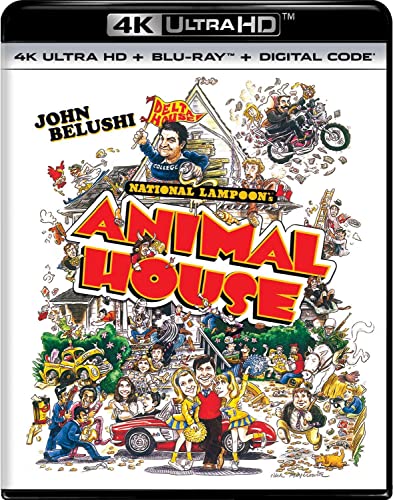 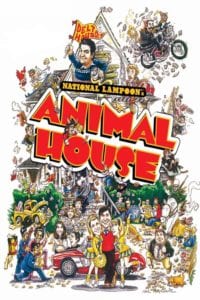 The fascist Omega house shuns the two and forces them to spend time with foreigners and other losers during their rush party. The two go to the next house, the Delta house, which couldn’t be more different. The Deltas rush the potentials with beer, fun, and a drunk brother named Bluto pissing on their legs. Eric “Otter” Stratton, the rush chair, is even damn glad to meet them.

Next, Vernon Wormer, the Dean of Faber College, meets with the president of Omega house and poster boy for the Hitler Youth, Greg Marmalard. Dean Wormer wants to kick Delta House off the college more than a fat guy wants a cheap all you can eat buffet. The Dean puts the Deltas on “Double-Secret Probation” upon learning the Deltas were already on probation and enlisted Marmalard and his minions in his quest to impose his will.

During ROTC calisthenics, Neidermeyer, another Omega House preppy, bullies Flounder. Brothers Bluto, played by John Belushi, and D-Day, played by the poor man’s Dan Aykroyd, devise a scheme for Flounder to get back at Neidermeyer and stick it to the dean at the same time. The three go all Godfather and sneak Neidermeyer’s horse in the Dean’s office. Bluto and D-Day then give Flounder a gun, to do what we all know what must be done. Unbeknownst to Flounder, however, Bluto and D-Day previously loaded the gun with blanks.

Flounder shoots the gun, pointed away from the horse, however, and the gunshot causes the horse to have a heart attack and die in the office. The next day, Dean Wormer meets with the Faber town mayor, and resident mafia don , in Dean Wormer’s office, while work crew saw through the horse’s carcass. I bet I know what the school cafeteria’s mystery meat is.

Next, the Deltas throw a toga party as only they could. Otis Day and the Knights play in the basement, beer is flowing, and Bluto smash’s a dirty-hippy’s guitar. The Dean’s wife shows up to the party, upon invitation by the suave Otter, and Pinto’s girl drinks too much and passes out. Ever the gentleman, Pinto took her home in a shopping cart.

Dean Wormer uses the party as the excuse he was looking for, organizes a kangaroo court, and revokes the Delta charter and confiscates all of the Delta’s belongings; except for one bottle of Jack Daniels that Bluto drinks faster than JaMarcuss Russell can down Purple Drank.

Otter, Pinto, Flounder, and another Delta upperclassman, Boon, go on a road trip to take their minds off of things. Otter picks up a few girls from a nearby college by pretending to be the fiancé of a recently deceased student. The group goes to a bar where Otis Day and the Knights are playing and quickly find out they are the only white people in the place. The other bar customers intimidate the guys into leaving, which they do in a hurry, and leave their dates behind like a bunch of 2 dollar whores.

Next, Otter is lured to a motel room upon the promise of a little inter-Fraternity-Sorority relations. However, Otter doesn’t realize IT’S A TRAP until it’s too late and gets beaten up by the Omega guys. To make matters worse, Dean Wormer expels all of the Deltas from the school because of poor mid-term grades. As a final “F” you, Dean Wormer informs the guys’ draft boards of their change of status making them eligible for the draft.

The Deltas are morally dejected until Bluto gives an inspirational speech; one that Churchill would be proud of to rally the troops after the Germans bombed Pearl Harbor. The guys set to work and crash the homecoming parade with the mother of all homecoming parade floats.