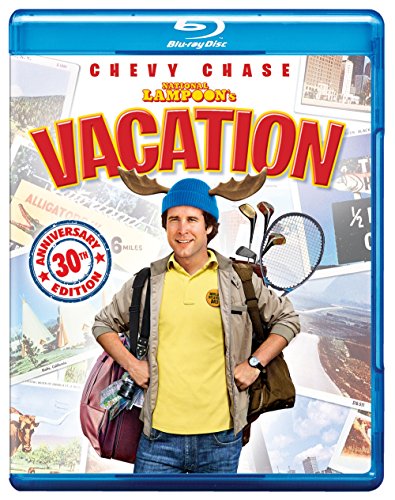 National Lampoon’s Vacation was released in July of 1983 and grossed over $61 million at the box office. The film was followed by three theatrical sequels, one direct-to-video spin-off, and one remake/reboot to be released next year with Ed Helms.

In the film, everything is planned, packed… and about to go hilariously wrong. The Griswolds are going on vacation. In the driver’s seat is Clark Griswold (Chase), an everyman eager to share the open road and the wonders of family togetherness, and his wife Ellen (D’Angelo). Myriad mishaps, crude kin (Quaid), encounters with a temptress (Brinkley), financial woes, Aunt Edna (Coca) on the roof, one security guard (Candy) and 2,460 miles later, it’s a wonder the Griswolds are together. There’s never been a family vacation like it. Except maybe yours. And that helps explain why the classic comedy remains so popular and so very funny.

Disclaimer: Affiliate links are contained in this post. This means when you click a link, and purchase an item, Movie House Memories will receive an affiliate commission. Advertisers and Affiliate Partnerships do not influence our content. See our Terms of Use about the inclusion of affiliate links on this site for more information.
March 16, 2013
1 minute read
Show More
Back to top button
Close
Close