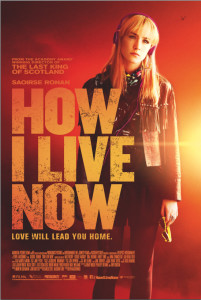 Magnolia Pictures has released a second theatrical trailer for the drama How I Live Now. The film is directed by Kevin Macdonald and stars Saoirse Ronan, Tom Holland, Anna Chancellor, George MacKay, Corey Johnson, and Sophie Ellis. The screenplay was written by Jack Thorne. The film is based on the novel by the same name written by Meg Rosoff. How I Live Now is scheduled for a release in the UK on October 4, 2013. The film is scheduled to release in the United States on November 8th.

In the film, an American girl on holiday in the English countryside with her family finds herself in hiding and fighting for her survival as war breaks out.