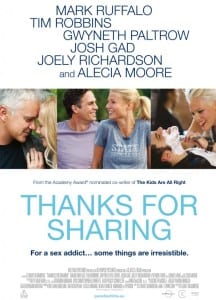 Lionsgate has released a second theatrical trailer for their upcoming comedy/drama Thanks For Sharing. The film is co-written and directed by Stuart Blumberg. The cast of the film includes Gwyneth Paltrow, Mark Ruffalo, Tim Robbins, Joely Richardson, Josh Gad, Patrick Fugit, and Alecia Moore. Thanks For Sharing premiered at the 2012 Toronto International Film Festival and is scheduled to hit theaters on September 20th.

Set in New York, the movie follows the lives of three friends who meet while attending 12-step meetings to help treat sex addition. Tim Robbins is Mike, a leader in the sex-addiction community whose twenty-something son has turned up at home after months away and is struggling with substance issues. Mike’s sponsee is Adam (Mark Ruffalo, a guy who has gone six-years in the program without falling off the wagon. He starts a relationship with Phoebe (Gwyneth Paltrow), and finds it difficult after going so long without sex to have it be part of this new relationship. They befriend an doctor (Josh Gad) whose addiction is ruining his medical career.