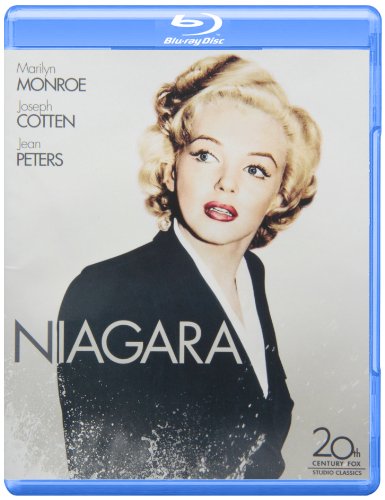 20th Century Fox Home Entertainment has announced that they will bring will bring the thriller Niagara to Blu-ray this summer. The film is directed by Henry Hathaway and stars Marilyn Monroe, Joseph Cotten, Jean Peters, and Max Showalter. Niagara will be available for purchase online and in stores beginning on July 30th.

In the film, a vacationing couple, George and Rose Loomis (Cotton and Monroe), rent a quaint bungalow at romantic Niagara Falls. But Rose and her lover plan to murder the unsuspecting George – in the falls! A dramatic departure from her more upbeat roles, Monroe’s fascinating performance as the scheming murderess paints a powerfully dark portrait of human sexuality.

Niagara was released in February of 1953 and grossed over $6 million in worldwide box office.

Disclaimer: Affiliate links are contained in this post. This means when you click a link, and purchase an item, Movie House Memories will receive an affiliate commission. Advertisers and Affiliate Partnerships do not influence our content. See our Terms of Use about the inclusion of affiliate links on this site for more information.
June 20, 2013
1 minute read
Show More
Back to top button
Close
Close