Out in Terrell County, Texas near the Rio Grande, a drug deal goes horribly wrong. In its aftermath, a simple welder named Llewellyn Moss finds 2 million dollars in a box. He decides to keep the money for himself, but unfortunately for him, one of the cartel bosses hires Anton Chigurh to get their money back. Chigurh kills everyone that comes in front of him to get to the welder. Meanwhile, an elderly sheriff named Ed Tom tries to figure out what all the killing is about and bring law and order back to the area. 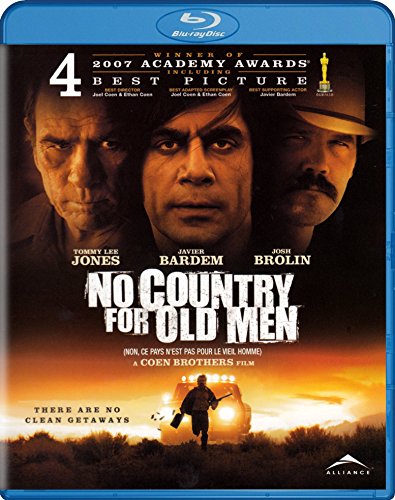 No Country for Old Men [Blu-ray] 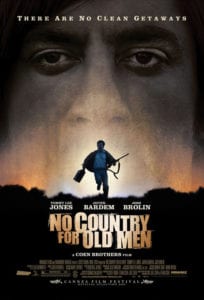 No Country for Old Men takes place during June 1980 in Terrell County, Texas; a place of expansive open land. Sheriff Bell reflects on the increasing violence in the area that seems to be out of control.

Meanwhile, a hitman named Anton Chigurh escapes custody by strangling to death the deputy who had the nerve to arrest him. He flees in the deputy’s car until he can pull over an unsuspecting citizen, and kill them for their car.

Llewelyn Moss is a welder and Vietnam veteran hunting in the middle of nowhere. He stumbles upon a bad drug deal where there are many dead men and a briefcase with two million dollars in it. Moss takes the money and runs home.

Later that night, Moss can’t sleep, and he returns to the scene to give water to a dying man he left there. However, a group of men from the cartel in a truck arrive as well, and shoot at Moss. He barely escapes with his life.

Knowing that the men will be able to track where he lives in the morning, he makes his wife, Carla Jean, head home to her mother’s, and he holds up in the motel Del Rio. There, Moss hides the briefcase in an air duct.

The rival cartel’s bosses hire Anton Chigurh to get their money back at all costs. He finds Moss’ abandoned truck at the scene, and locates his home. He breaks in to Moss’ house with a bolt pistol that can blow the lock out of the door.

By now, Sheriff Bell is on the case, and he arrives at Moss’ home to investigate minutes after Chigurh leaves. He notices the blown out lock, and his deputy draws his gun. This makes the Sheriff smile as he never feels the need to draw his gun.

The money hides a tracking device, and Chigurh uses it to find the location of the briefcase. He encounters a group of Mexicans, working for the original cartel, waiting to kill Moss as he returns to the room. Instead, Chigurh kills them all.

Luckily, Moss also rented another room adjacent to that one, and he quietly escapes with the money.

At the next hotel, Moss finds the tracking device shoved into the money, but he’s too late to turn it off, and disappear from Chigurh. Chigurh is at his door, and again he blows the lock out of the door with the bolt pistol. Moss shoots him before Chigurh can open the door.

Moss escapes out the window with the money, and both men shoot at each other in the streets. Badly wounded, Moss stumbles across the border, and into Mexico. He tosses the briefcase into the bushes on the banks of the Rio Grande before crossing. The next morning, a Mariachi Band finds Moss bleeding on the street, and they take him to the hospital.

Carson Wells, another hired thug, finds Moss at the hospital, and tries to get Moss to give him part of the money in return for protection from Chigurh. Moss declines at first.

Back in town, Chigurh attends to his wounds, and then finds and kills Wells at his hotel. While there, Moss calls Wells, but Chigurh answers. He tells Moss that he will kill his wife, Carla Jean, if Moss doesn’t give him the money. He says Moss is a dead man regardless, but he can spare her life by doing the right thing.

Moss hangs up on Chigurh, snatches back the briefcase from the Rio Grande, and tells Carla Jean to meet him at a motel in El Paso. Before she leaves, Carla Jean calls Sheriff Bell, and accepts his offer of protection for her husband.

The original Mexican cartel follows Carla Jean and her mother to the bus station where mom reveals to one of the gang members Moss’ location in El Paso.

Sheriff Bell arrives at the motel to the sounds of gunshots, and a pickup truck speeding off. Later that night, Carla Jean arrives to find that her husband is dead. Bell inspects the hotel room one last time, but he feels the need to draw his gun before entering the room. Although Chigurh appears to hide behind the door, Sheriff Bell finds the room empty with the vent cover removed from the wall.

Back home, Sheriff Bell visits his Uncle Ellis, an ex-lawman himself, and he says he’s retiring because he feels “over-matched”. Ellis objects because the area has always been violent, but Bell retires anyway.

Time passes, and Carla Jean attends her mother’s funeral. When she returns home, she finds Chigurh waiting for her. He flips a coin, and tells her to call it. She refuses, and tells him that killing her is his choice alone; not a coin’s.

Chigurh leaves her house, but not before carefully checking the soles of his boots. He drives away, but another car runs a red light, and slams into his car; nearly killing him. He bribes two boys to keep quiet about his presence, and leaves; even though the bone in his arm is sticking out from his skin.

The film ends with Bell sharing two dreams with his wife. In the first, he lost some money his father gave him. In the other, he and his father rode through a snowy mountain pass, and his father went ahead to make a fire in the darkness where he waited for his son.