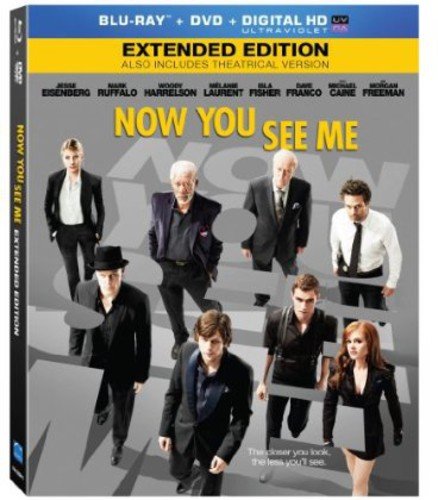 Lionsgate Films has announced the addition of the film Now You See Me to their upcoming slate of Blu-ray releases. Directed by Louis Leterrier, the crime thriller has an all star cast that features Jesse Eisenberg, Isla Fisher, Dave Franco, Woody Harrelson, Morgan Freeman, Mark Ruffalo, Elias Koteas, Common, and Michael Caine. Lionsgate will release the film in a combo pack edition. Now You See Me is currently available for pre-order online and will be available in stores everywhere beginning on September 3rd.

In the film, the Four Horsemen, a magic super-group led by the charismatic J. Daniel Atlas (Eisenberg), perform a pair of high-tech, high-profile magic shows. First amazing audiences by remotely robbing a Paris bank while in Las Vegas, and then exposing a white-collar criminal and funneling his millions into the audience members’ bank accounts, baffling the authorities. FBI Special Agent Dylan Rhodes (Ruffalo) is determined to make the magicians pay for their crimes—and to stop them before they pull off what promises to be an even more audacious heist. But he’s forced to partner with Alma (Laurent), an Interpol detective about whom he is instantly suspicious. Out of desperation, he turns to a famed magic debunker, who claims the Paris bank trick was actually a meticulously planned illusion. Dylan and Alma begin to wonder if the Horsemen have an outside point person. If so, finding him (or her) would be the key to ending the magicians’ crime spree. But who could it be? Or…could it really be…magic?

Now You See Me was released in May of 2013 and has grossed over $212 million in worldwide box office to date.

The Blu-ray combo pack will include several special features, including: