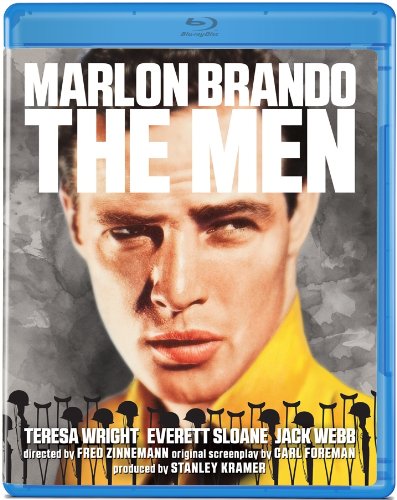 Olive Films have announced that they are adding The Men (also known as Battle Stripe) to their upcoming April slate of Blu-ray releases. The film is directed by Fred Zinnemann and stars Marlon Brando, Teresa Wright, Everett Sloane, and Jack Webb. The Men will be available online and in stores beginning on April 30th.

Brando set the mark for a brilliant career in Stanley Kramer‘s The Men, his motion picture debut. As a war veteran paralyzed in combat, he returns home to face the torturous ordeal of rehabilitation. The courage and strength of the soldier are betrayed by the fear and insecurity of the man when he learns he will never walk again. Embittered by his condition, he refuses to see his fiancée and sinks into a solitary world of hatred and hostility. Fighting the wishes of her parents, the coldness of a guilt ridden society and her own self-doubts, it is she who must force him to confront the reality of his condition and break his physical and emotional confinement. When feeling starts to return to his legs, it could be his last hope …..or his final downfall.

The Men was released in September of 1950 and was nominated for an Academy Award for Best Writing – Story and Screenplay (Carl Foreman).

Olvie Films have not released any details concerning the exact tech specs and special features that will be included with the disc.