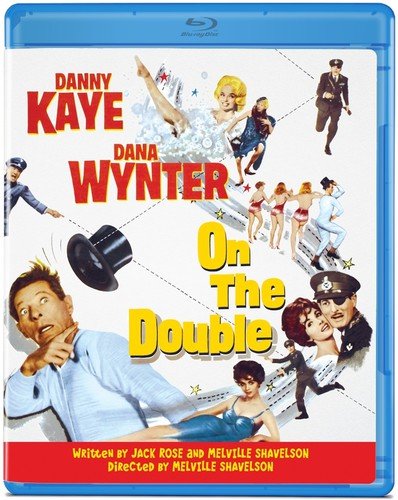 On the Double [Blu-ray]

Olive Films has announced the addition of the war comedy On The Double to its upcoming slate of Blu-ray releases. The film was directed by Melville Shavelson, who wrote the screenplay with Jack Rose. The comedy starred Danny Kaye, Dana Wynter, Wilfrid Hyde-White, Diana Dors, and Margaret Rutherford. On The Double will be available for purchase online and in stores beginning on August 20th.

Kaye headlines this wacky WWII comed. He plays a timid American soldier who bears a striking resemblance to a famous British Colonel. The Military Intelligence decides to use the poor chap as a pawn and recruit the naive soldier to impersonate the legendary Colonel, who’s highly targeted by the Nazi assassins. Co-starring Wynter as the Colonel’s suspicious wife, Dors as the Colonel’s personal driver and mistress and White as the Colonel overseeing the mission. On The Double was released in May of 1961.

Holiday (1938) has a Whirlwind Engagement with the Criterion Collection

The Adventures of Pluto Nash (2002) Crash Lands on DVD

Holiday (1938) has a Whirlwind Engagement with the Criterion Collection

The Adventures of Pluto Nash (2002) Crash Lands on DVD