In On The Waterfront, Terry Malloy was once a prize fighter; he could have been a contender, but that’s for another day. Now, he finds himself tending his pigeons and running errands at the docks for a corrupt boss of the dockers union named Johnny Friendly. After Terry witnesses two of Johnny’s thugs murder a man he meets the victim’s sister. This rouses a number of emotions in him, which leads her to introduce him to Father Barry. The Father then tries to persuade Terry to provide information to the courts which can help bring down the dock’s racketeers. 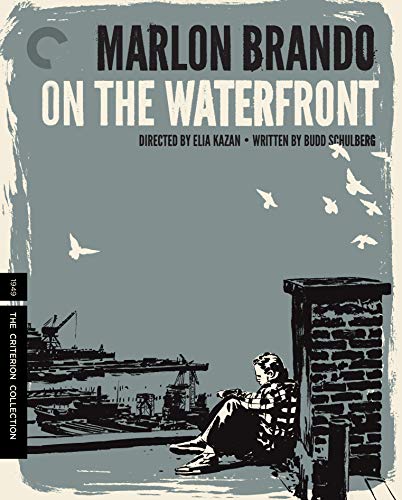 On the Waterfront (Criterion Collection) [Blu-ray]

‘On The Waterfront’ Movie Summary 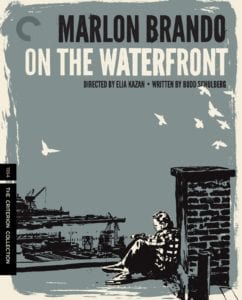 On The Waterfront is a story of corruption and fear in the New York waterfront district during the mid-20th century. The film follows the story of Terry Malloy, played to Academy Award perfection by Marlon Brando. Terry is a dockworker and former boxer whose older brother Charlie works for mob-connected union boss Johnny Friendly. Terry’s years as a boxer are in the past, and now he works for Friendly on the periphery; mainly out of allegiance to his brother.

Friendly rules the waterfront, and the police and Waterfront Crime Commission are powerless to stop him. Most dock workers play deaf and dumb to what is going on. Those unlucky few who dare to open their mouths come to a grisly end. Joey Doyle is one such unfortunate soul. He’s set to testify against Friendly before the Crime Commission. Joey’s friend, Terry, unwittingly lures the stool pigeon into an ambush. The thugs throw him off of the building to his death. This upsets Terry because he believed he was only assisting them in leaning on Joey to silence him; not kill him.

Meeting Joey’s sister, Edie, further exacerbates Terry’s guilt. Angry about her brother’s untimely death, Edie shames the local priest Father Barry into action against the mob-controlled union. Father Barry holds a meeting with some of the dock workers. He hopes they will turn against the union and Friendly.

The union boss sends Terry to attend the meeting, and report back to him. However, Friendly’s enforcers break up the meeting, and Terry helps Edie escape the violence. Terry begins to fall for Edie, but does not tell her of his involvement in her brother’s death.

Meanwhile, Father Barry convinces another dock worker, “Kayo” Dugan, to testify to the commission. Unfortunately, a load of whiskey crushes Dugan in a staged accident. Father Barry rushes to the scene of the man’s death. There, he gives a powerful sermon on the docks reminding the longshoreman of their duty to right and to God. Although the workers pelt the priest with fruits and vegetables, his words get to Terry; just as the commission subpoenas him to testify.

Overcome by his conscious, Terry confesses his involvement in Joey’s death to Father Barry and Edie. Despite her growing feelings for Terry, Edie breaks up with him for his limited role in her brother’s death. Father Barry plays upon Terry’s guilt, and leans heavily on the dockworker to come clean and testify against Friendly.

Meanwhile, Friendly becomes uncertain about Terry’s loyalty, and decides to kill Terry unless Charley can coerce him into keeping quiet. Charley attempts to bribe his brother with a good job, but that proves unsuccessful, he threatens Terry with a gun. However, Terry doesn’t fear his brother. He goes onto an impassioned monologue of how his brother should have watched out for him as a boxer.

Instead, he ordered Terry to throw a fight at Friendly’s command. That one act started Terry on a downward spiral into Palookaville. He has now become a shell of the person he could have been. Charley gives Terry the gun and advises him to run. Terry heads to Edie’s apartment, who at first refuses to see Terry. However, she finally acknowledges her growing love for the ex-fighter and allows him in.

However, Friendly has Charley tailed, and when he fails to sway Terry, the union boss has Charley murdered. He then has Charlie’s body hung in an alley for Terry to find. After finding Charley’s body, Terry sets out to seek his revenge on Friendly. But Father Barry prevents Terry from taking on the mobster and convinces him to testify against Friendly. Terry shows up for his subpoena. There, he provides damaging testimony implicating Friendly in not only Joey’s murder but other illegal activities as well.

Friendly now faces indictment for several crimes, and cuts Terry off from employment on the dock. Terry’s his former friends and neighbors ostracized him. Afterwards, Edie suggests that they both move away from the waterfront together to put this behind them. First though, Terry decides to confront Friendly at the docks. The ex-boxer shows up at the water front looking for work. When Friendly doesn’t call him for a shift, he calls out Friendly. He states that he is proud of what he did.

Friendly and Terry brawl, which Friendly’s enforcers soon join in and make short work of Terry. They nearly beat him to death. The dockworkers, who witness the confrontation, show their support for Terry by refusing to work unless Terry is working too. Friendly threatens the men, but they push him into the river.

Encouraged by Father Barry and Edie, the badly injured Terry forces himself to his feet. He enters the dock, followed by the other workers. A soaking wet and angry Friendly, now left with nothing, swears revenge on them all. His threats fall on deaf ears as they enter the garage and the door closes behind them.