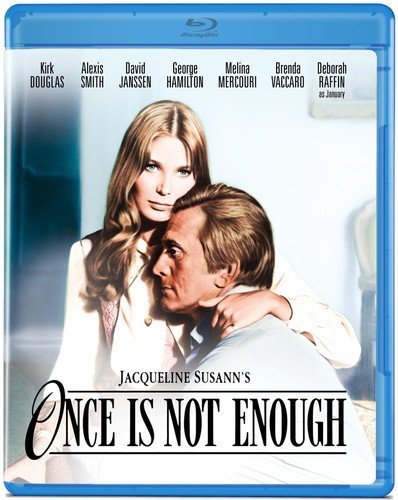 Once Is Not Enough [Blu-ray]

Olive Films has announced that it adding the romantic drama Once Is Not Enough to their upcoming slate of Blu-ray releases. The film was directed by Guy Green and is based on a screenplay written by Julius J. Epstein. The romance film starred Kirk Douglas, Alexis Smith, David Janssen, George Hamilton, Deborah Raffin, and Melina Mercouri. Once Is Not Enough will be available for purchase in stores and online beginning on July 23rd.

Based on a Best Seller by Jacqueline Susann. January Wayne (Raffin), the adoring daughter of movie producer Mike Wayne (Douglas) returns home to New York, only to find her father married to Deidre Milford Granger (Smith), the fifth richest woman in the world. The marriage is one of the conveniences for Mike, who has lost his magic touch as a producer, and is in desperate need of money to continue his and his daughter’s lavish lifestyles. Jealous January bitterly resents her father and cannot accept the moral codes of this new world, finding only frustration. She gets a job with Gloss Magazine and falls in love with Pulitzer Price-winning novelist Tom Colt (Janssen), whose virile prose and celebrated fistfights turn out to be a compensation for his physical inadequacies. Her Stepmother Dee wants her to marry David Milford (Hamilton), Dee’s handsome young cousin and wolf-about-town, who’s having an affair with the reclusive retired movie star, Karla (Mercouri), who in turn is carrying on a clandestine lesbian affair with Dee.

Once Is Not Enough was released in theaters in June of 1975. Brenda Vaccaro won a Golden Globe Award (and an Academy Award nomination) for her supporting performance as the man-crazy editor of a fashion magazine.

Disclaimer: Affiliate links are contained in this post. This means when you click a link, and purchase an item, Movie House Memories will receive an affiliate commission. Advertisers and Affiliate Partnerships do not influence our content. See our Terms of Use about the inclusion of affiliate links on this site for more information.
June 6, 2013
1 minute read
Show More
Back to top button
Close
Close