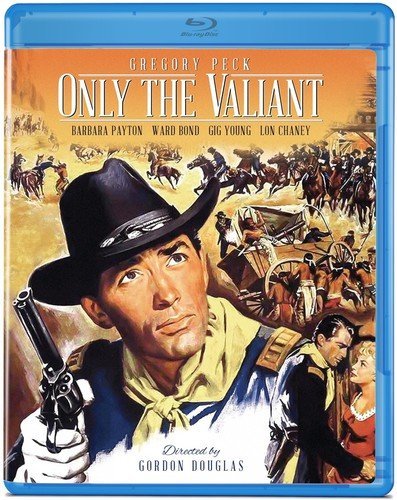 Only the Valiant [Blu-ray]

Olive Films has announced the addition of the western adventure Only The Valiant to its upcoming slate of Blu-ray releases. The film was directed by Gordon Douglas and starred Gregory Peck, Barbara Payton, Ward Bond, Gig Young, and Lon Chaney Jr. Only The Valiant will be available for purchase online and in stores beginning on August 27th.

Peck is the hard-nosed leader of a rough group of cavalry soldiers, whose by-the-book action alienate the men in his command. The company’s dislike for Peck intensifies when he assigns a popular lieutenant to take his place on a dangerous mission: delivering a captured Apache chief across the barren desert to a stronger Army outpost. When the detail is attacked and the lieutenant viciously tortured and killed, the men are convinced that Peck had ulterior motives and pin the death on his shoulders. Revenge looms on the horizon when Peck hand selects a patrol to hold off the avenging Apache chief at a deserted fort nearby. Away from their outpost and the threat of Army investigation, the men who hate Peck most are determined to see him pay… even though their own lives may depend on Peck’s survival. Only The Valiant was released in April of 1951.