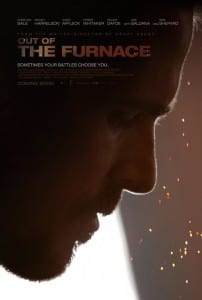 Relativity Media has released the first theatrical trailer for the thriller Out of the Furnace. The film is directed by Scott Cooper, who wrote the screenplay along with Brad Ingelsby. The production stars Christian Bale, Zoe Saldana, Woody Harrelson, Willem Dafoe, Forest Whitaker, Casey Affleck, and Sam Shepard. Out of the Furnace is scheduled to hit theaters on December 6th.

In the film, Russell (Bale) and his younger brother Rodney (Affleck) live in the economically-depressed Rust Belt, and have always dreamed of escaping and finding better lives. But when a cruel twist of fate lands Russell in prison, his brother is lured into one of the most violent and ruthless crime rings in the Northeast – a mistake that will almost cost him everything. Once released, Russell must choose between his own freedom, or risk it all to seek justice for his brother.