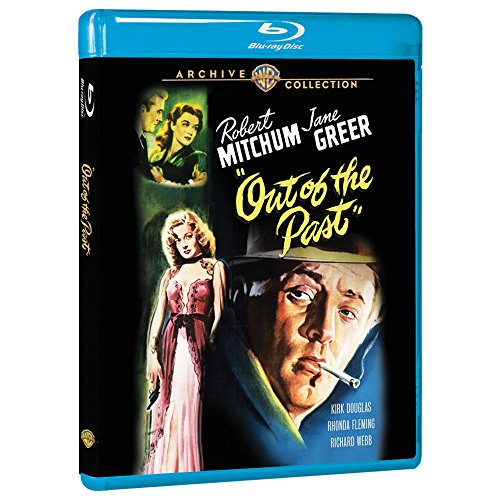 Out of the Past [Blu-ray]

Warner Archive Collection released Out of the Past to Blu-ray on August 12, 2014. Jacques Tourneur directed the film which starred Robert Mitchum, Jane Greer, and Kirk Douglas.

‘Out of the Past’ Movie Synopsis

For the last three years, Jeff Bailey has run his own gas station in a small town; trying to live a normal life. Before that, he was a very good private detective up in San Francisco. His last job was for a gangster named Whit Sterling who hired him to find Kathy Moffat. Kathy shot him before stealing $40,000 from him too. Whit hires Jeff to bring her and the money back, but he winds up falling in love with her in Mexico instead.

After she runs out on Jeff, he decides it’d be better if he finds a new line of work. Back in the small town, one of Whit’s henchmen spots Jeff pumping gas at his new business. Whit immediately summons him to his Lake Tahoe estate where he makes Jeff an offer he can not refuse; recover some incriminating tax files, and all will be forgotten. However, Jeff quickly realizes that Whit has set him up to pin a murder on him.

RKO Radio Pictures released Out of the Past on November 25, 1947. Jacques Tourneur directed the film which starred Robert Mitchum, Jane Greer, and Kirk Douglas.