Pee-wee Herman is a lifetime resident of Fairville, USA, and he leads a very ordinary life. One day at work at Dan’s Diner, he meets Joe Manganiello, and a bromance of epic proportions begins. Joe invites Pee-wee to go on his first vacation ever to visit him on his birthday in New York City. In the first town Pee-wee comes to after he leaves Fairville, he gets kidnapped by three female bank robbers, and they force him to drive them away from the crime scene. The women steal his car the next morning at the hotel they are hiding out in, and leave Pee-wee there to rot. Pee-wee is undaunted, and decides to hitchhike it across America to get to the Big Apple. Along the way, Pee-wee meets a traveling salesman, a farmer with nine voluptuous and virginal daughters, the aviator Penny King, and the Amish. After all that, Pee-wee arrives in New York City, but falls down a well just before arriving to Joe’s birthday party. Will Pee-wee survive the ordeal? Only if you say today’s secret word! 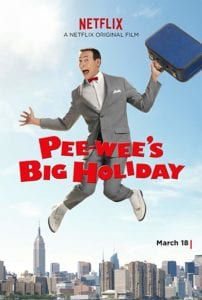 Pee-wee’s Big Holiday takes place in the small town of Fairville where Pee-wee Herman works as a cook at Dan’s Diner. One day, he meets the actor Joe Manganiello, and they quickly develop a bromance. Joe convinces Pee-wee to leave Fairville for the first time in his life to travel to New York City as a guest at his birthday party.

While it’s a difficult decision for Pee-wee, he decides to go. Not too far from town, Pee-wee runs into three women, Pepper, Freckles, and Bella. They appear to be in trouble, and Pee-wee assumes they’re just innocent women. However, in reality, they just robbed a bank. The ladies climb into Pee-wee’s little Fiat 600, and off they go.

However, the women soon steal the Fiat, and Pee-wee is forced to hitch a ride from a traveling salesman named Gordon. After the two visit a snake farm, Pee-Wee winds up at Farmer Brown’s farmhouse to spend the night.

Farmer Brown has nine daughters, and they all have a romantic interest in Pee-wee. The girls spend the night hitting on him, and the next morning, Pee-wee is all they can talk about. So, Farmer Brown insists Pee-wee marry one of his daughters. At the wedding, Pee-wee must use a disguise he picked up at the snake farm to bail on the farmer and his daughters.

Next up, Pee-wee catches a ride in an RV with three fabulous African-American hairdressers headed to a hairdressing contest. When Pee-wee laments that he’s so far from New York, the hairstylists encourage him to continue on.

Penny King then comes along, and swoops Pee-wee up in her flying car resembling Chitty Chitty Bang Bang. She says she’ll fly him all the way to New York, but they crash in the wilderness. It’s there that Pee-wee meets Grizzly Bear Daniels. He offers to get Pee-wee out of the woods, but instead, he takes him to his cozy cave.

Losing valuable time, Pee-wee runs off until he comes across an Amish community. He entertains the locals with a silly balloon act. It’s there that Pee-wee meets up with the lady bank robbers again as they try to steal a horse buggy. Pee-wee convinces them to leave money for the Amish to replace it.

The four of them finally arrive in New York city, and the ladies are quickly arrested for the robbery. Unfortunately for Pee-wee, he falls down a well in Central Park before making it to Joe’s birthday party.

Thinking that Pee-wee didn’t want to come to his party, Joe sulks. He decides not to go to his own party. When he turns on the TV, he sees a news story about rescuers trying to free Pee-wee from his predicament. Joe runs down to the well, and does everything in his power to help rescue Pee-wee.

As the rescuers work to get him out, we see the entire town of Fairville, Pepper, Freckles, and Bella; Gordon, the traveling salesman; the staff of the snake farm, the hairdressers, Penny King and Grizzly Bear Daniel watch the rescue.

Now free, Pee-wee asks Joe about the party. Joe replies, “Pee-wee, we are the party.” He then reveals a miniature version of Fairville he created.

The next day Pee-Wee humbly returns to his job at Dan’s Diner. He periodically shows the Fairville residents some of the items he picked up during his trip. Joe rides in to Fairville one more time to give Pee-Wee a ride on his motorcycle.