In Psycho, Marion Crane works in an office building in Phoenix, Arizona, and she’s sick of the daily grind of life. She can not marry her boyfriend Sam because all his money goes towards alimony. However, one fateful Friday, Marion’s boss tasks her to deposit $40,000 in the bank. She takes this opportunity to steal the dough, and start a new life. She quickly hightails it out of state, and heads to Sam’s California store. On the long drive, Marion finds herself caught in a storm, and pulls off the main highway where she finds the Bates Motel. It looks like a nice place to stay for the night. Unfortunately, a quiet young man named Norman manages the place, and his mother seems to be driving him crazy. Marion better watch out, or she might not ever be the same. 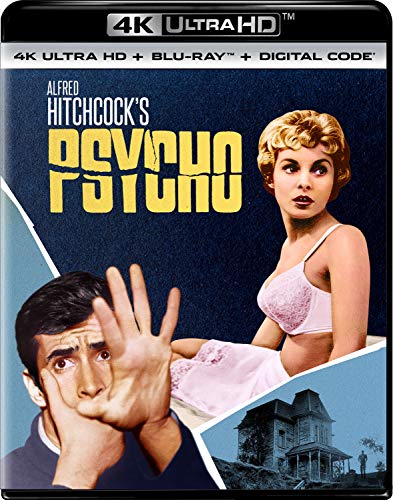 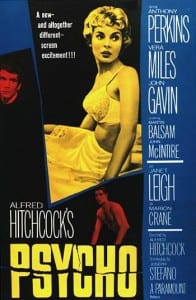 Our film begins with a slow pan of the sparse landscape that is downtown Phoenix, Arizona. The camera focuses in on a hotel room where Marion Crane, played by Janet Leigh, and her boyfriend Sam Loomis, played by John Gavin, are basking in the glow of a little afternoon delight. However, the pillow talk soon turns serious when the loving couple talks about making their relationship respectable. The couple can’t afford to get married, and Marion is getting tired of sneaking around.

Marion returns to work at a realtor’s office, depressed over her relationship. A client comes in with $40,000 in cash to purchase a house for his daughter. The money is entrusted to Marion, who decides to steal it and skip town. She heads to California to start a new life with Sam.

In her flight from Phoenix, Marion stops along the side of the road to sleep. She is awakened by a police officer who appears to suspect her of something almost immediately. The policeman lets her go, but upon arriving in another town, Marion pulls into a used car dealership and hastily exchanges her car for another one and hits the road again. Driving during a rainy night, Marion seeks refuge in the small, hidden Bates Motel. It is explained that the motel recently lost business due to a diversion of the main highway. The night manager is young, nervous Norman Bates, played brilliantly by Anthony Perkins. Bates checks her in and invites her to a light dinner in his bird filled parlor. Norman discloses that his mother is mentally ill, but he becomes irate and bristles when Marion suggests that she be institutionalized.

After her conversation with Norman, Marion decides to return to Phoenix and return the stolen money. She returns to her room and figures out how she is going to repay the money she spent on the trip. Marion later takes a shower in her room. During the shower, a shadowy female figure comes and stabs her to death. Norman bursts into the bathroom and discovers Marion’s dead body. He wraps the body in the shower curtain and cleans up the bathroom. He puts Marion’s body, along with the $40,000, in her car and sinks her car in a nearby swamp.

Meanwhile, Marion’s sister Lila and boyfriend Sam Loomis are concerned about her disappearance. A detective named Arbogast confirms Marion is suspected of having stolen $40,000 from her employer. Inexplicitly, Arbogast teams with the sister and the boyfriend, and states that he will help them find Marion. Arbogast eventually finds the Bates Motel. Norman’s evasiveness and stammering arouse his suspicions. Arbogast later enters the Bates’ residence, looking for Norman’s mother. Once again, a female figure emerges from her room and murders Arbogast.

Fearing something has happened to Arbogast, Sam and Lila go to the town of Fairvale and talk with the local sheriff. He is puzzled by the detective’s claim that he was going to talk to Norman’s mother and states that Mrs. Bates died years ago, along with her lover, in a murder-suicide. At the same time, Norman, seen from above, carries his mother down to the cellar of their house as she verbally protests the arrangement.

Frustrated by the Sheriff’s lack of suspicion, Sam and Lila decide to take matters into their own hands. They rent a room at the Bates Motel and discover the cabin Marion stayed in. Lila explores it and finds a scrap of paper with “$40,000” written on it, and notes that the bathtub has no shower curtain. Sam distracts Norman while Lila sneaks into the house, looking for Mrs. Bates. Norman subdues Sam and chases Lila. Seeing Norman approaching, Lila hides in the cellar and discovers Mrs. Bates sitting in a rocking chair. The chair rotates to reveal the preserved corpse of Mrs. Bates. Norman enters the basement, wearing a dress and wig while wielding a large knife, revealing Norman to be the murderer all along. Sam enters and saves Lila.

After Norman’s arrest, a psychiatrist who interviewed Norman reveals that Norman had murdered his mother and her lover years ago, and later developed a split personality to erase the crime from his memory. At times, he is able to function as Norman, but other times the mother personality completely dominates him. Norman is now locked into his mother’s identity permanently. Mrs. Bates, in a voice-over, talks about how harmless she is and how it was really Norman, not she, who committed the murders. The final scene shows Marion’s car being recovered from the swamp.