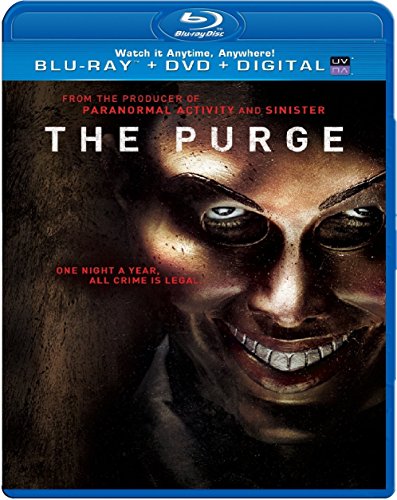 Universal Pictures has announced the addition of the horror thriller The Purge to their upcoming slate of Blu-ray releases. The film is written and directed by James DeMonaco and stars Ethan Hawke, Lena Headey, Adelaide Kane, Edwin Hodge, and Max Burkholder. The Purge is currently available for pre-order online and will be available in stores everywhere beginning on October 8th.

The Purge is described as follows:

If on one night every year, you could commit any crime without facing consequences, what would you do? In “The Purge,” a speculative thriller that follows one family over the course of a single night, four people will be tested to see how far they will go to protect themselves when the vicious outside world breaks into their home.

In an America wracked by crime and overcrowded prisons, the government has sanctioned an annual 12-hour period in which any and all criminal activity—including murder—becomes legal. The police can’t be called. Hospitals suspend help. It’s one night when the citizenry regulates itself without thought of punishment. On this night plagued by violence and an epidemic of crime, one family wrestles with the decision of who they will become when a stranger comes knocking.

When an intruder breaks into James Sandin’s (Ethan Hawke) gated community during the yearly lockdown, he begins a sequence of events that threatens to tear a family apart. Now, it is up to James, his wife, Mary (Lena Headey), and their kids to make it through the night without turning into the monsters from whom they hide.

The Purge was released in June of this year and has grossed over $86 million in worldwide box office to date.

The Purge Blu-ray will include several special features, including:

Disclaimer: Affiliate links are contained in this post. This means when you click a link, and purchase an item, Movie House Memories will receive an affiliate commission. Advertisers and Affiliate Partnerships do not influence our content. See our Terms of Use about the inclusion of affiliate links on this site for more information.
September 27, 2013
2 minutes read
Show More
Back to top button
Close
Close