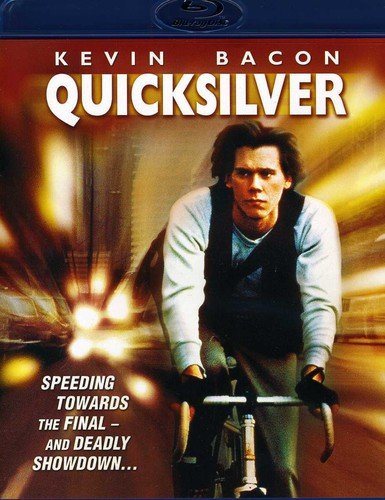 Image Entertainment and RLJ Entertainment have announced the addition of the crime drama Quicksilver to their upcoming slate of Blu-ray releases. The film is written and directed by Thomas Michael Donnelly and stars Kevin Bacon, Jami Gertz, Paul Rodriguez, Rudy Ramos, Laurence Fishburne, and Louie Anderson. Quicksilver is currently available for pre-order online and will be available for purchase everywhere beginning on August 6th.

In the film, Jack Casey (Bacon) is pedaling for all he’s worth as a bicycle messenger on a collision course with danger. As he darts through the city traffic, making his rounds in the fast-paced world of maverick messengers, Jack uncovers a sinister web of murder and intrigue. When he falls for Terri (Gertz), a fellow messenger who has become a pawn of an unscrupulous drug dealer, it’s up to Jack to act quickly. Speeding toward the final-and deadly-showdown, it’s a heart-stopping chase, and the ultimate test of Jack’s courage. Set to the driving beat of a dynamic soundtrack featuring The Who’s Roger Daltrey, the pulse of urban America comes alive in a story with more twists and turns than a rush-hour shortcut.

Quicksilver was released in February of 1986 and grossed over $7 million at the box office.

Image Entertainment and RLJ Entertainment have not released any details concerning the exact tech specs and special features that will be included with the disc.

Disclaimer: Affiliate links are contained in this post. This means when you click a link, and purchase an item, Movie House Memories will receive an affiliate commission. Advertisers and Affiliate Partnerships do not influence our content. See our Terms of Use about the inclusion of affiliate links on this site for more information.
July 26, 2013
1 minute read
Show More
Back to top button
Close
Close