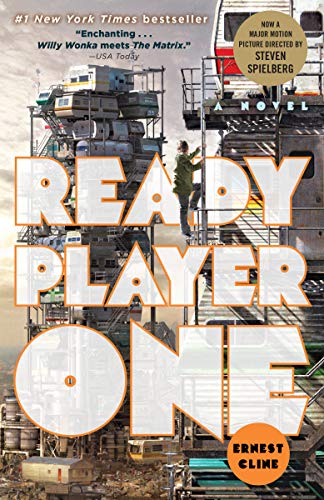 Ready Player One: A Novel

If you like your science fiction with a heavy dose of 80s pop culture mixed with today’s MMO culture, then 2011’s “Ready Player One” is your dystopian dream come true. The book starts off with the death of the recluse creator of the VR world OASIS, James Donovan Halliday. He has left his empire to the person who can find a special easter egg in his online world he created which is worth billions and billions of dollars. This sets off a competition of Willy Wonka proportions that pits everyone against everyone, and even more sinister, mighty corporations against common people.

While the book starts off a bit slow, the story is enthralling once the first gate is cleared, and the contest starts to heat up. Cline throws a lot of 80s pop culture at you throughout the story, and any personal lack of knowledge of that time frame may affect your own enjoyment of this book. Readers who aren’t up to date on that era may get lost here and there (I had to look up some of the Anime references), or not be drawn as much into the world Cline has created. The dialogue is a bit flat at times, but that is off set by the quirky group of antiheroes looking to win the contest. Overall, if you’re into the ‘Me’ decade and love gaming, this book will be a delightful nostalgia trip and a great read.

Ernest Cline wrote the book which has won an Alex Award in 2012, and is slated to become a Steven Spielberg film that is scheduled to be released on March 30, 2018.

In the year 2044, reality is an ugly place. The only time teenage Wade Watts really feels alive is when he’s jacked into the virtual utopia known as the OASIS. Wade’s devoted his life to studying the puzzles hidden within this world’s digital confines—puzzles that are based on their creator’s obsession with the pop culture of decades past and that promise massive power and fortune to whoever can unlock them. But when Wade stumbles upon the first clue, he finds himself beset by players willing to kill to take this ultimate prize. The race is on, and if Wade’s going to survive, he’ll have to win—and confront the real world he’s always been so desperate to escape.

In the year 2044, reality is an ugly place. The only time teenage Wade Watts really feels alive is when he's jacked into the virtual utopia known as the OASIS.