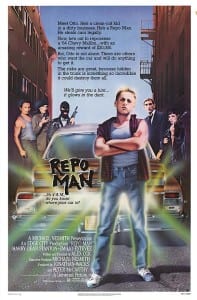 Repo Man was well received by critics and is considered by many as one of the best films of 1984.  It currently holds a 97% “Fresh” rating on the review aggregate website Rotten Tomatoes.  The film was voted as the eighth best film set in Los Angeles in the last 25 years, by a group of Los Angeles Times writers and editors, with two criteria: “The movie had to communicate some inherent truth about the L.A. experience, and only one film per director was allowed on the list”.  Entertainment Weekly ranked the film #7 on their list of “The Top 50 Cult Films”.

Here is the original theatrical trailer for Repo Man.