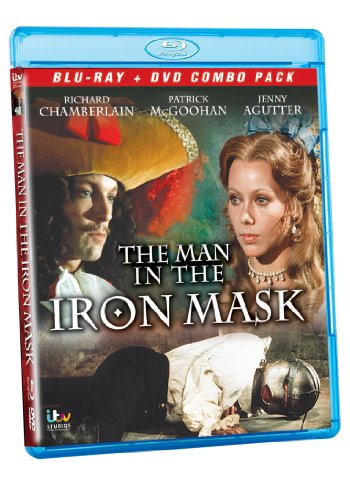 The Man in the Iron Mask [Blu-ray]

Hen’s Tooth Video has announced the addition of the adventure drama The Man in the Iron Mask (1977) to their upcoming slate of Blu-ray releases. The film was directed by Mike Newell and starred Richard Chamberlain, Patrick McGoohan, Louis Jourdan, Ian Holm, Jenny Agutter, and Ralph Richardson. The Man in the Iron Mask will be available in a combo pack edition everywhere beginning on October 8th.

Alexandre Dumas’ classic tale of good and evil twins is brought lavishly to the screen by director Newell. Chamberlain shines in dual roles as both the imprisoned man in the hideous iron mask and his foppish twin, King Louis XIV of France. Under the sinister influence of Minister of Finance Fouquet, Louis rules with wasteful opulence. His brother Philippe, the rightful heir, lives in obscurity with no knowledge of his birthright. But the Captain of the Musketeers, D’Artagnan, has plans to restore the declining fortunes of the throne by secretly substituting Philippe for the King.

Hen’s Tooth Video has not released any details concerning the exact tech specs and special features that will be included with the disc.

Disclaimer: Affiliate links are contained in this post. This means when you click a link, and purchase an item, Movie House Memories will receive an affiliate commission. Advertisers and Affiliate Partnerships do not influence our content. See our Terms of Use about the inclusion of affiliate links on this site for more information.
September 28, 2013
1 minute read
Show More
Back to top button
Close
Close