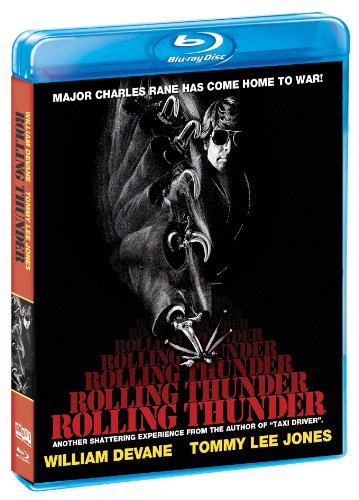 Shout! Factory has revealed that it is planning to bring to Blu-ray the cult film Rolling Thunder for the first time in the United States.  The film is directed by John Flynn and stars William Devane, Tommy Lee Jones, and Linda Haynes.  The screenplay was written by Paul Schrader and Heywood Gould.  Rolling Thunder will be available for purchase online and in stores on April 9, 2013.

In Rolling Thunder, Major Charles Rane (Devane) comes back from the war and is given a number of gifts from his hometown because he is a war hero.  Some greedy thugs decide that they want to steal a number of silver dollars from him.  In the process they also manage to kill his wife (Haynes) and son and destroy his hand.  The Major wants revenge so he enlists the help of his war buddy Johnny (Jones) to meet the thugs in a final showdown.  The film also stars James Best and Dabney Coleman.

Rolling Thunder was released in 1977 and quickly became a cult film.  The film is one of writer/director Quentin Tarantino‘s favorite films.  Rolling Thunder Pictures, a company founded by Tarantino that briefly distributed reissues of cult films, was named after this film.