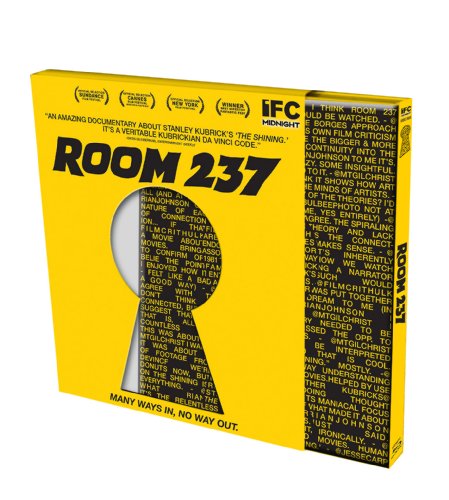 IFC Films has announced the addition of the critically-acclaimed documentary Room 237 to their upcoming slate of Blu-ray releases. The film is an in-depth analysis of Stanley Kubrick‘s classic film The Shining. Room 237 is directed by Rodney Ascher. The film is currently available for pre-order online and will be available in stores everywhere beginning on September 24th.

Room 237 is officially described as follows:

After the box office failure of Barry Lyndon, Stanley Kubrick decided to embark on a project that might have more commercial appeal. The Shining, Stephen King’s biggest critical and commercial success yet, seemed like a perfect vehicle. After an arduous production, Kubrick’s film received a wide release in the summer of 1980; the reviews were mixed, but the box office, after a slow start, eventually picked up. End of story? Hardly. In the 30 years since the film’s release, a considerable cult of Shining devotees has emerged, fans who claim to have decoded the film’s secret messages addressing everything from the genocide of Native Americans to a range of government conspiracies. Rodney Ascher’s wry and provocative Room 237 fuses fact and fiction through interviews with cultists and scholars, creating a kaleidoscopic deconstruction of Kubrick’s still-controversial classic.

IFC Films has not released any details concerning the exact tech specs and special features that will be included with the disc.

Disclaimer: Affiliate links are contained in this post. This means when you click a link, and purchase an item, Movie House Memories will receive an affiliate commission. Advertisers and Affiliate Partnerships do not influence our content. See our Terms of Use about the inclusion of affiliate links on this site for more information.
August 12, 2013
1 minute read
Show More
Back to top button
Close
Close