In the little resort town of Nelson, Washington, Fire Chief CD Bales is a well-loved man, but he’s terribly sensitive about his remarkably long nose. When a beautiful and intelligent astronomer named Roxanne, arrives in town to study a comet, he’s immediately smitten with her. Unfortunately for him, she’s attracted to another firefighter named Chris. Roxanne confides her interest in Chris CD, who reluctantly passes it on to him. Chris, for his part, doesn’t know what to do. He convinces CD to ghost-write a letter to her for him. However, what Chris and Roxanne do not know is that CDs feelings in the letter are actually his own towards Roxanne. Not realizing who wrote the letter, Roxanne falls for Chris’ looks and CD’s mind. CD doesn’t speak up for himself as he thinks no woman would ever love a face like his. 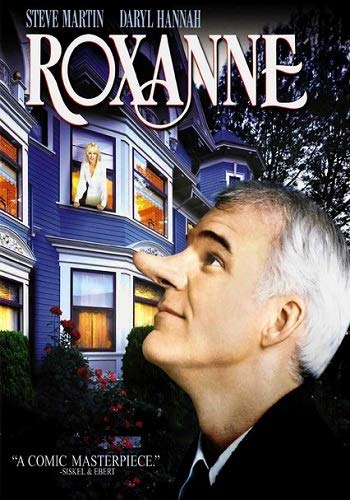 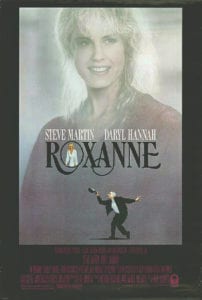 Roxanne is the Steve Martin-written romantic-comedy remake of the French classic Cyrano de Bergerac story. Steve Martin plays Charlie “C.D.” Bales, the small town fire chief that not only has a huge heart, a huge IQ, and a nose the size of Rhode Island where, when made fun of, leads to bullies understanding CD has a huge right hook to defend himself when goaded into a fight.

Although CD is a Renaissance man to end the Renaissance, he is overlooked in the game of love by all women leading him to become the town’s real-life selfless superhero, albeit a celibate and lonely one. His volunteer fire department is stuffed full of inept town characters who not only are unable to put out fires they start themselves inside the fire station, they also set themselves on fire when attempting to put those same fires out.

CD’s best friend, Dixie, has rented a large home to a gorgeous rocket scientist/astronomer named Roxanne, played by the dazzling Daryl Hannah. CD comes to the heroic and acrobatic aid of Roxanne and he is immediately smitten by her very obvious charms on full display. At the local bar, CD is challenged to a fight by a thug who makes fun of his huge nose in front of all CD’s friends. But instead of fighting him, CD chooses to insult the bully by telling 20-something jokes about HIS nose.

The bully then attacks CD only to have CD prove once again he may have a huge nose, but he can handle himself in a bar fight. But just as CD has finally set his romantic sights on a Roxanne, he unknowingly has hired the hunk-of-the-month, Chris, a professional firefighter that is basically vanilla ice cream: Chris is awesome to look at and tastes great, but is ultimately too little substance and boring behind that cute little nose and cute little ass and bulging muscles.

Roxanne instantly falls for Chris, but Chris is too nervous around girls to make the first move. So Roxanne, realizing Chris works for CD at the fire station, asks a favor of the heartbroken CD to get Chris to ask her out. When CD unselfishly obliges, Chris panics and can’t meet Roxanne in person because he’s too nervous. He begs CD to write her a letter for him, even though CD objects ethically to the offer because it’s dishonest.

Chris continues begging until CD eventually writes such a masterful, personal, incredible, sexual letter to Roxanne where she thinks it’s actually Chris writing the letter, she immediately wants to meet Chris in person. Chris has a panic attack and once again asks for CD to save him. So CD comes up with an idea to use a police radio to whisper intellectual, romantically-charged language into Chris’ ear as he speaks those same words to the increasingly aroused Roxanne.

It works until Chris fumbles over some complicated words and Roxanne ends the date abruptly. Chris and CD hatch a plan for Chris to woo Roxanne with CD’s words while she stands angrily on the balcony. This too fails so CD takes over himself and accidentally seduces Roxanne into sleeping with Chris.

After the incredibly romantic evening, Roxanne has to leave town for a week. She asks CD’s help in asking Chris to write her a letter while she is away. CD never tells Chris and writes 20 amazingly romantic letters to Roxanne within six days. Roxanne rushes home thinking Chris has written the letters.

When Chris and Roxanne meet, CD has to rush to tell Chris of the deception. When Roxanne finally understands what is going on, she doesn’t know if she’s in love with Chris for what she thinks and dreams he is… or is it CD for all of his very obvious, and oversized gifts. Whom will she choose in the end? Watch Roxanne to find out.