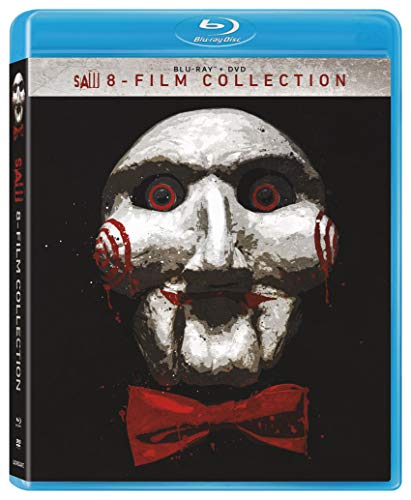 Obsessed with teaching his victims the value of life, a deranged, sadistic serial killer abducts the morally wayward. Once captured, they must face impossible choices in a horrific game of survival. The victims must fight to win their lives back or die trying.

Jigsaw is back. When a new murder victim is discovered with all the signs of Jigsaw’s hand, Detective Eric Matthews begins a full investigation and apprehends Jigsaw with little effort. But for Jigsaw, getting caught is just another part of his plan. Eight more of his victims are already fighting for their lives and now it’s time for Matthews to join the game.

Jigsaw is back and ready to play his games with damaged person. This time, Jigsaw has kidnapped a doctor, Lynn, whose game is to keep Jigsaw alive until another man completes his game. That other man, Jeff, is a despondent father who has lost his son in a drunk driving accident. When Jeff is given a chance to seek revenge against all those people who were involved in the death of his son and the injustice that followed, what will Jeff do? Kill or forgive?

Jigsaw and his apprentice Amanda are dead. Now, upon the news of Detective Kerry’s murder, two seasoned FBI profilers, Agent Strahm and Agent Perez, arrive in the terrified community to assist the veteran Detective Hoffman in sifting through Jigsaw’s latest grisly remains and piecing together the puzzle. However, when SWAT Commander Rigg is abducted and thrust into a game, the last officer untouched by Jigsaw has but ninety minutes to overcome a series of demented traps and save an old friend or face the deadly consequences.

John Kramer, the notorious serial killer Jigsaw is dead. Detective Mark Hoffman is deemed a hero after he saves a young girl and “escapes” one of Jigsaw’s games, or so it seems. FBI Special Agent Peter Strahm also survives one of Jigsaw’s traps but is suspicious of Hoffman after an injured Agent Lindsay Perez says the detective’s name. While Strahm investigates Detective Hoffman’s past, five people, who helped burn down a building which was supposedly abandoned, face a series of tests set up by Jigsaw.

Special Agent Strahm is dead, and Detective Hoffman has emerged as the unchallenged successor to Jigsaw’s legacy. However, when the FBI draws closer to Hoffman, he is forced to set a game into motion, and Jigsaw’s grand scheme is finally understood.

As a deadly battle rages over Jigsaw’s brutal legacy, a group of Jigsaw survivors gathers to seek the support of self-help guru and fellow survivor Bobby Dagen, a man whose own dark secrets unleash a new wave of terror.

Bodies are turning up around the city, each having met a uniquely gruesome demise. As the investigation proceeds, evidence points to one man: John Kramer. But how can this be? The man known as Jigsaw has been dead for over a decade.