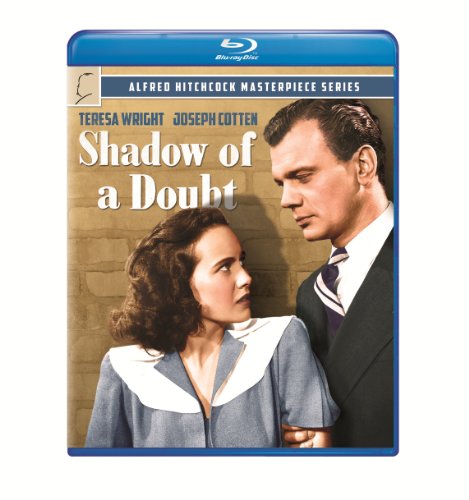 Shadow of a Doubt [Blu-ray]

Universal Studios Home Entertainment has announced that they are releasing Shadow of a Doubt onto Blu-ray this July. The film is directed by Alfred Hitchcock and stars Teresa Wright, Joseph Cotten, Henry Travers, Patricia Collinge, Macdonald Carey, and Wallace Ford. Shadow of a Doubt will be available online and in stores beginning July 2,2013.

A young girl, overjoyed when her favorite uncle comes to visit the family, slowly begins to suspect that he is in fact the “Merry Widow” killer sought by the authorities. Alfred Hitchcock’s favorite of all his films, made all the more chilling by the small town ambience supplied by co-writer Thornton Wilder, stars Joseph Cotten, Teresa Wright, Macdonald Carey, and Hume Cronyn.

Shadow of a Doubt features a DTS-HD Master Audio 2.0 Mono track and the following extras:

Disclaimer: Affiliate links are contained in this post. This means when you click a link, and purchase an item, Movie House Memories will receive an affiliate commission. Advertisers and Affiliate Partnerships do not influence our content. See our Terms of Use about the inclusion of affiliate links on this site for more information.
April 9, 2013
363 1 minute read
Show More
Subscribe
Login
2 Comments
Oldest
Newest Most Voted
Inline Feedbacks
View all comments
James

This film is not available for sale at this time. What made Universal change its mind?

This film is not available for sale at this time. What made Universal change its mind?