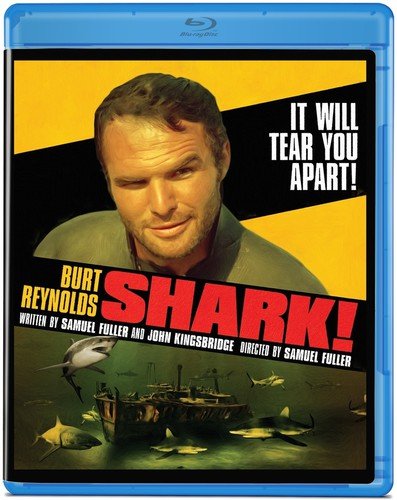 Olive Films has announced that they are adding Shark! to their upcoming slate of Blu-ray releases. The film was directed by Samuel Fuller and stars Burt Reynolds, Arthur Kennedy, Silvia Pinal, and Barry Sullivan. Shark! will be available in stores and online June 25, 2013.

Burt Reynolds stars as Caine, a smooth, fast talking gun-runner who loses his shipment of arms and becomes stranded in a small port city on the Mediterranean. Finding himself hard up for cash, he tries to scam his way out of town without success. His luck changes when he runs into Anna (Pinal), a seductive siren of the sea. Anna propositions Caine to work for her and her partner, the Professor (Kennedy), who are supposedly doing research in the shark infested waters off the coast.

Shark! was released in October of 1969. The original film’s title was Caine, after the main character’s name, but the producers decided to change the name so it would sound like a killer animal movie, in order to draw younger crowds.

Disclaimer: Affiliate links are contained in this post. This means when you click a link, and purchase an item, Movie House Memories will receive an affiliate commission. Advertisers and Affiliate Partnerships do not influence our content. See our Terms of Use about the inclusion of affiliate links on this site for more information.
May 26, 2013
345 1 minute read
Show More
Subscribe
Login
0 Comments
Inline Feedbacks
View all comments
Most Recent Posts
Facebook Twitter LinkedIn Tumblr Pinterest Reddit
Back to top button
Close
wpDiscuz
0
0
Would love your thoughts, please comment.x
()
x
| Reply
Close