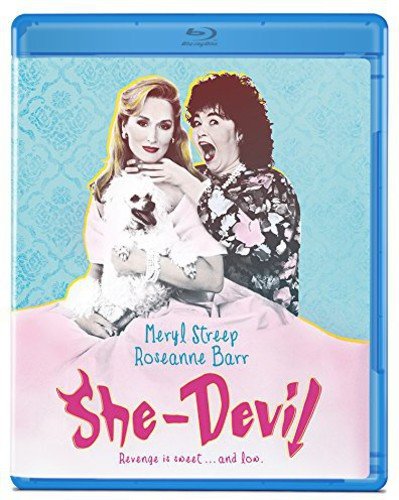 Olive Films has announced that they are releasing She-Devil (1989) onto Blu-ray. The film is directed by Susan Seidelman and stars Meryl Streep, Roseanne Barr, Ed Begley Jr., and Linda Hunt. She-Devil will be available online and in stores on June 9, 2015.

Someone stole her husband… and now there’s hell to pay! Barr puts a hilarious twist on the “domestic goddess” persona that made her a star, and Streep makes you “marvel at [her] real comic witchcraft” (Newsweek). She-Devil is a film that doesn’t stop at mild-mannered prankster revenge – it’s a funny Fatal Attraction on steroids, with attitude, that’s gone bad! Meet Mary Fisher (Streep). She’s got it all: a cliff-side villa overlooking the ocean, a wholly satisfying career as a romance novelist… and Ruth Patchett’s husband. And when Ruth (Barr) discovers that her social-climbing spouse (Begley, Jr.) has been spending his time at Mary’s pink-and-white-monstrosity-by-the-sea, she doesn’t just vow to get him back… she vows to get even! Setting out to destroy his business accounts – as well as Mary’s precious reputation and career – Ruth proves the old adage about a woman scorned – by delivering up a husband nearly scorched!

She-Devil was released in the United States on December 8, 1989 and grossed over $15 million at the box office.

Olive Films has not released any information concerning special features and technical specifications:

Here is the theatrical trailer for She-Devil, courtesy of MOVIECLIPS Classic Trailers.

Disclaimer: Affiliate links are contained in this post. This means when you click a link, and purchase an item, Movie House Memories will receive an affiliate commission. Advertisers and Affiliate Partnerships do not influence our content. See our Terms of Use about the inclusion of affiliate links on this site for more information.
April 24, 2015
1 minute read
Show More
Back to top button
Close
Close