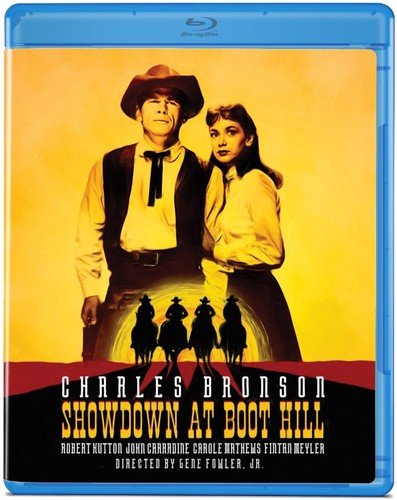 Olive Films has announced that they are adding the western Showdown at Boot Hill  to their upcoming slate of Blu-ray releases. The film was directed by Gene Fowler Jr. and stars Charles Bronson, Robert Hutton, John Carradine, and Carole Mathews. Showdown at Boot Hill will be available in stores and online sometime during the month of June.

In the film, bounty hunter Luke Welsh (Bronson) arrives looking for a wanted man. When that man draws on him he has to kill him. To collect his reward he needs a statement identifying him. But the man was well liked in town and no one will sign such a statement. When he outdraws another man who thought he was faster, some townsmen decide he should be killed and they organize a mob to go after him.

Showdown at Boot Hill was released in May of 1958 and was notable that is was the first film where Bronson was the top billed actor.

Disclaimer: Affiliate links are contained in this post. This means when you click a link, and purchase an item, Movie House Memories will receive an affiliate commission. Advertisers and Affiliate Partnerships do not influence our content. See our Terms of Use about the inclusion of affiliate links on this site for more information.
May 4, 2013
324 1 minute read
Show More
Subscribe
Login
0 Comments
Inline Feedbacks
View all comments
Most Recent Posts
Facebook Twitter LinkedIn Tumblr Pinterest Reddit
Back to top button
Close
wpDiscuz
0
0
Would love your thoughts, please comment.x
()
x
| Reply
Close