Silent Night, Deadly Night is the heartwarming story of little Billy Chapman who was traumatized by his parents’ Christmas Eve murder, then brutalized by sadistic orphanage nuns. But when grown-up Billy is to dress as jolly St. Nick, he goes on a yuletide rampage to “punish the naughty!” Santa Claus is coming to town … and this time he’s got an axe! Robert Brian Wilson and Scream Queen Linnea Quigley star in this jaw-dropping horror classic that a nation of angry mothers still cannot stop! 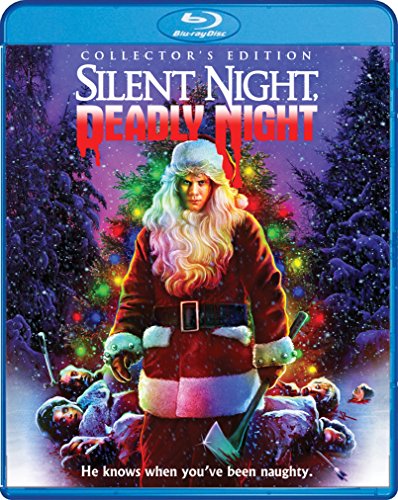 $40.46  in stock
BUY NOW
Amazon.com
*As an Amazon Associate we earn from qualifying purchases. 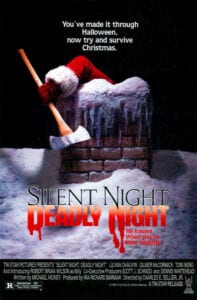 Billy Chapman is five years old in 1971 when his family visits his grandfather in a nursing home. Only little boys bring gramps out of his catatonic state anymore, and when he and Billy are finally alone, we get a rise from gramps. He warns Billy about jolly old men with beards giving presents only to the good kids while punishing any that were naughty.

The family leaves gramps, and as they drive home, a thief dressed as Santa robs a liquor store, and kills its clerk. His car breaks down, and Billy’s unsuspecting dad pulls over to help. Santa then shoots Billy’s dad dead, and slits his mother’s throat while Billy watches from the bushes, and his infant brother, Ricky, cries in the car.

Three years pass, and Billy and Ricky celebrate Christmas at Mother Superior’s “No Fun Zone” orphanage. She finds pleasure in child abuse when they misbehave, and considers their punishment as a good thing.

The kindly Sister Margaret encourages Billy to engage with the other children, but Mother Superior is always there to punish him for any slip up. When on Christmas morning a man dressed as Santa visits, Billy freaks out and punches him. Mother Superior is not pleased.

Flash forward ten years to the dystopian year of 1984, and our little boy is all grows up! You know what big boy? You’re grown up. You’re grown up! Sorry…wrong film…Billy leaves the orphanage, and Sister Margaret lands him a job as a stocker at a toy store.

Billy develops a boner for his co-worker, Pamela, and titters between thoughts of banging her wildly and thoughts of his mother’s red slit…neck. Christmas comes around yet again, and after the store’s Santa gets injured, Billy’s boss, Mr. Sims, makes Billy take his place.

During the store’s Christmas Eve party, Billy tries to enjoy himself, but dressing as Santa brings out suppressed memories and carnal thoughts. When he witnesses his co-worker, Andy, attempt to rape Pamela in the back stock, Billy snaps.

He strangles Andy with a string of Christmas lights, and hangs him by the chimney without care. He then whips out a utility knife, and slices Pamela open while declaring Mother Superior style punishment as good.

Mr. Sims is beyond white-girl wasted at this point, but he goes to the back stock anyway to check on the weird noises he heard. As he turns to leave the room, he becomes even more hammered when Billy hits him over his head with one. Mr. Sims blacks out forever.

When Billy turns off the store’s lights, his manager, Mrs. Randal, goes to the back stock as well. She screams a girly scream from 10,000 horror movies, and runs to the phone. Billy wacks off the phone line with an ax before she can call the cops; forcing her to run and hide.

Billy then stalks her throughout the store in a game of cat and mouse. When she manages to trip Billy, and run out the front door, Billy shoots her with a bow and arrow. Mrs. Randal gets a quick death from Santa for this year’s Christmas present. Fearing the worst, Sister Margaret makes it to the crime scene, and upon seeing the carnage, she heads off to the police station for help.

Meanwhile, at a nearby house, a cool kid named Tommy tries to place his 8-Ball in Denise’s side pocket on a pool table. Denise’s sister Cindy interrupts the love fest, and then Denise’s feral pussy…cat meows at her to come inside.

By this time, Billy shows up, and breaks through the door to Denise’s house. He stalks Denise, and then picks her up, and impales her with his mighty, might deer antlers. Tommy sensing a cock block exits the basement to find Denise dead, and Santa under the mistletoe. After a quickie fight, Billy tosses Tommy through a window.

This commotion peaks little Cindy’s interest, and when she sees Billy, she gets excited that Santa has arrived. So, Billy asks her if she’s been naughty or nice this year. When she says nice, Billy gives her that bloody utility knife he killed Pamela with.

Next we see some stereotypical 80s bullies picking on two boys out sledding. They take the sleds for a ride after shooing the boys away. Billy shows up, and whips out his might ax. In one firm swing, he cuts one of the bully’s heads clean off while the other one screams a girly scream from 10,001 horror movies.

The next morning, Christmas morning mind you, Captain Richards finds Sister Margaret sleeping in his police station. The two race off to the orphanage knowing that will be Billy’s final stop in an attempt to kill Mother Superior. Richards’ Deputy Barnes is already there, and he shoots dead Father O’Brien who is also dressed as Santa. Billy soon arrives, and kills Deputy Barnes in the shed with an ax.

Billy then heads to the main orphanage building, where one of the children there lets him in because he thinks it’s the Santa they have been waiting for. He spots the now wheelchair bound Mother Superior with the children surrounding her. Billy takes his big ax, and inches closer for one last heavenly murder. Captain Richards shows up with Sister Margaret in tow, and shoots Billy in the back.

As the children gather around a dying Santa Claus, Billy looks at them and says, “You’re safe now. Santa Claus is gone.” Billy’s brother Ricky is there, and he looks at Mother Superior, and coldly says to her, “Naughty.”
/silent-night-deadly-night-1984/