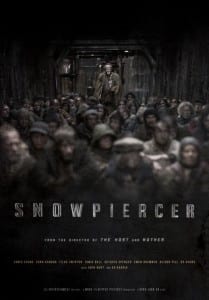 The Weinstein Company has released a new international trailer for Snowpiercer. The film is directed by Joon-ho Bong and stars Chris Evans, Alison Pill, Jamie Bell, John Hurt, Tilda Swinton, Ed Harris, Ewen Bremner, and Octavia Spencer. Snowpiercer is scheduled to be released in Denmark and South Korea in August. The sci-fi drama is tentatively scheduled to be released in the United States sometime later in 2013.

The film is set in 2031 A.D. where, after a failed experiment to stop global warming, an ice age has killed off nearly all life on the planet. The only survivors are the inhabitants of the ‘Snowpiercer’, a massive train that travels around the planet and is powered by a perpetual-motion engine. Over time a class system evolves on the train, with the elites inhabiting the ‘front’ of the train and poor inhabiting the ‘back’ of the train. Tired of the poor conditions suffered by riders in the ‘back’, a revolution occurs with the riders attempting to seize control of the engine which the elites in the ‘front’ consider ‘sacred’. The film is based on the French graphic novel Le Transperceneige by Jacques Lob and Jean-Marc Rochette.