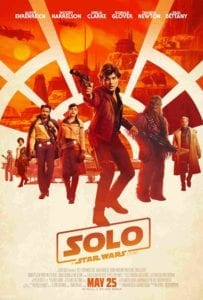 MHM’s own Chad Moon reviews Solo: A Star Wars Story (2018) straight from the parking lot right after he watched it. Listen in to what he has to say, and try not to pay attention to the guy in blue pacing in the background. We don’t like his attitude.

Board the Millennium Falcon and journey to a galaxy far, far away in Solo: A Star Wars Story, an all-new adventure with the most beloved scoundrel in the galaxy. Through a series of daring escapades deep within a dark and dangerous criminal underworld, Han Solo meets his mighty future copilot Chewbacca and encounters the notorious gambler Lando Calrissian, in a journey that will set the course of one of the Star Wars saga’s most unlikely heroes.

Good Feeling About This