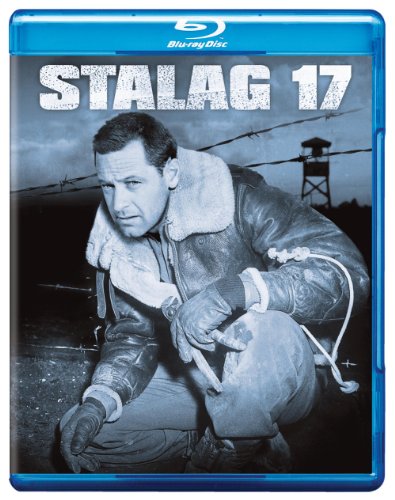 Warner Bros. Home Entertainment has announced the addition of the war drama Stalag 17 to their upcoming slate of Blu-ray releases. The film was directed by Billy Wilder and starred William Holden, Don Taylor, Otto Preminger, Robert Strauss, Harvey Lembeck, and Peter Graves. Stalag 17 is currently available for pre-order online and will be available in stores everywhere beginning on October 8th.

Two worthy Academy Award nominees from 1950’s Sunset Boulevard — actor William Holden and producer/co-writer/director Billy Wilder — reteamed for the gripping World War II drama, Stalag 17. The result was another Best Director nomination for Wilder (his fourth), and the elusive Best Actor Oscar for Holden. Holden portrays the jaded, scheming Sergeant J.J. Sefton, a prisoner at the notorious German prison camp, who spends his days dreaming up rackets and trading with the Germans for special privileges. But when two prisoners are killed in an escape attempt, it becomes obvious that there is a spy among the prisoners. Is it Sefton? Famed producer/director Otto Preminger tackles a rare acting role as the camp’s commandant, and actor Robert Strauss won a Supporting Actor nomination for his role as “Animal.”

Stalag 17 was released in July of 1953 and grossed over $10 million in worldwide box office.

Disclaimer: Affiliate links are contained in this post. This means when you click a link, and purchase an item, Movie House Memories will receive an affiliate commission. Advertisers and Affiliate Partnerships do not influence our content. See our Terms of Use about the inclusion of affiliate links on this site for more information.
September 29, 2013
402 1 minute read
Show More
Subscribe
Login
0 Comments
Inline Feedbacks
View all comments
Most Recent Posts
Facebook Twitter LinkedIn Tumblr Pinterest Reddit
Back to top button
Close
wpDiscuz
0
0
Would love your thoughts, please comment.x
()
x
| Reply
Close