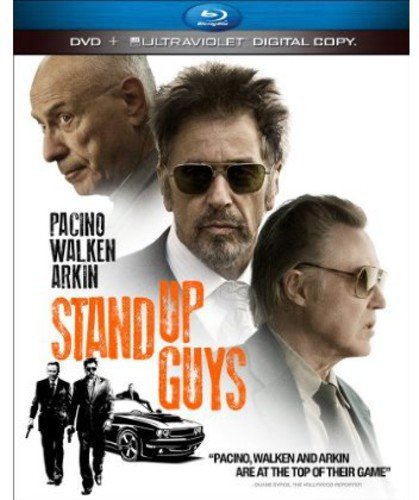 Lionsgate Films has announced that they will release the crime comedy Stand Up Guys onto Blu-ray this May. The film is directed by Fisher Stevens and is based on a screenplay by Noah Haidle. Stand Up Guys features a stellar cast that includes Al Pacino, Alan Arkin, Christopher Walken, and Julianna Margulies. The release will be available for purchase online and in stores across the nation on May 21st.

The tough, but touching film centers on three retired gangsters who reunite for one epic final night. However, one of the friends is keeping a dangerous secret – and his time to find an acceptable alternative is running out. As the sun rises on the guys’ reunion, their position becomes more and more desperate and they finally confront their pasts once and for all.

Stand Up Guys was released in February of 2013 and grossed over $3 million at the box office. The film was nominated for a Golden Globe for Best Original Song (“Not Running Anymore – Jon Bon Jovi).

Disclaimer: Affiliate links are contained in this post. This means when you click a link, and purchase an item, Movie House Memories will receive an affiliate commission. Advertisers and Affiliate Partnerships do not influence our content. See our Terms of Use about the inclusion of affiliate links on this site for more information.
March 28, 2013
374 1 minute read
Show More
Subscribe
Login
0 Comments
Inline Feedbacks
View all comments
Most Recent Posts
Facebook Twitter LinkedIn Tumblr Pinterest Reddit
Back to top button
Close
wpDiscuz
0
0
Would love your thoughts, please comment.x
()
x
| Reply
Close