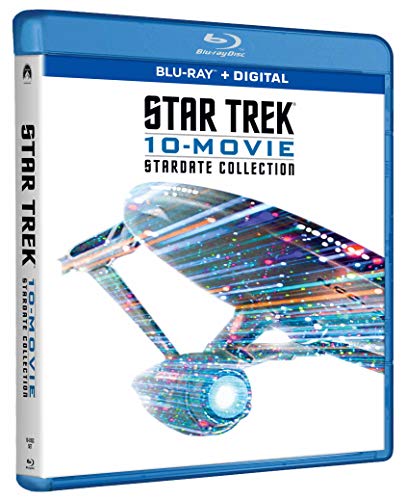 Paramount Home Media Distribution released the Star Trek 10-Movie Stardate Collection on October 6, 2020. Discover the Star Trek Universe and experience every unforgettable moment from Kirk’s triumphant return to the bridge of the U.S.S. Enterprise in STAR TREK: THE MOTION PICTURE to Picard, Data, and the crew of the U.S.S. Enterprise-E’s final battle for control of the Universe in Star Trek Nemesis. The spirit of the Enterprise lives on in the heart-stopping action and unforgettable characters of this brilliant collection.

When a planet-sized energy force of great power is headed for Earth, Kirk takes command of his old ship. They discover that the alien is the long-lost space probe Voyager. Now a sentient being, V’ger seeks a response from its creator or it will destroy earth.

The starship Enterprise and its’ crew is pulled back into action when old nemesis, Khan, steals a top secret device called Project Genesis. Khan schemes to set a deadly trap for his old enemy, Kirk…with the threat of universal Armageddon!

A surprise visit from Spock’s father provides a startling revelation: McCoy is harboring Spock’s living essence. With one friend alive and one not, but both in pain, Kirk attempts to help his friends by defying Starfleet’s Genesis planet quarantine.

A huge alien probe has entered the galaxy and begins to vaporize earths oceans. Spock determines the probes’ signal is meant for whales which are now extinct. Kirk and his crew must travel back in time in order to bring back whales and save the planet.

The Enterprise crew are on vacation when Sybok and his followers invade a “planet of peace.” They discover that it’s a ruse perpetrated by Sybok, who takes control of the Enterprise and pilots it to the “Great Barrier,” thinking God is on the other side.

After years at war, the Federation and the Klingon empire prepare for a peace summit. When a Klingon ship is attacked and the Enterprise is held accountable, the dogs of war are unleashed again, as both worlds brace for what may be their final encounter.

Stardate: the 23rd Century. Retired Starfleet officers James T. Kirk (William Shatner), Montgomery Scott (James Doohan) and Pavel Chekov (Walter Koenig) are guests of honour aboard the newly christened Enterprise-B. A test run takes an unexpected turn, however, when the starship encounters two vessels trapped inside the Nexus, a mysterious energy ribbon. During a perilous rescue attempt, Kirk is swept out into space. Seven decades later, Captain Jean-Luc Picard (Patrick Stewart) and the crew of Enterprise-D rescue an El Aurian physicist named Soran (Malcolm McDowell). Unbeknownst to Picard, Soran harbours a deadly plan that includes the destruction of the Enterprise and millions of lives. Now Picard’s only hope for a future rests within the Nexus…and a legendary captain from the past.

Capt. Picard and his crew pursue the Borg back in time to stop them from preventing Earth from initiating first contact with alien life.

When the crew of the Enterprise learn of a Federation plot against the inhabitants of a unique planet, Capt. Picard begins an open rebellion.

After the Enterprise is diverted to the Romulan planet of Romulus, supposedly because they want to negotiate a truce, the Federation soon find out the Romulans are planning an attack on Earth

Disclaimer: Affiliate links are contained in this post. This means when you click a link, and purchase an item, Movie House Memories will receive an affiliate commission. Advertisers and Affiliate Partnerships do not influence our content. See our Terms of Use about the inclusion of affiliate links on this site for more information.
October 6, 2020
3 minutes read
Show More
Back to top button
Close
Close