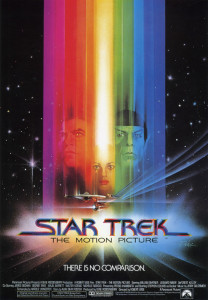 To coincide with the Star Trek: The Motion Picture‘s release, Pocket Books published a novelization written by Gene Roddenberry.  The only Star Trek novel Roddenberry wrote, the book adds back story and elements that did not appear in the movie; for example, the novelization mentions that Willard Decker is the son of Commodore Matt Decker from the original series episode “The Doomsday Machine”—a plot element intended for the Phase II television series.  The novel also has a different opening scene to introduce V’ger and Kirk, concentrates in sections on Kirk’s struggle with confidence in taking command of the Enterprise again and expands on Ilia and Decker’s relationship.  In addition to the novel, Star Trek printed media included a coloring book, comic (published by Marvel), and ship blueprints.  Toys included action figures, ship models, and a variety of watches, phaser mockups, and communicators.  McDonald’s sold specially designed Star Trek Happy Meals.  The marketing was part of a coordinated approach by Paramount and its parent conglomerate Gulf+Western to create a sustained Star Trek product line.  The Motion Picture novel started Pocket Books’ Star Trek book franchise, which produced 18 consecutive bestsellers within a decade.

Owing to the rush to complete the film, The Motion Picture was never screened before test audiences, something Wise later regretted.  The director carried the fresh print of the film to the world premiere, held at the K-B MacArthur Theater in Washington, D.C.  Roddenberry, Robert Wise, and the principal cast attended the function, which also served as an invitational benefit for the scholarship and youth education fund of the National Space Club.  While thousands of fans were expected to attend, rain reduced fan turnout to around 300.  The premiere was followed by a black-tie reception at the National Air and Space Museum.  More than 500 people—consisting of the cast and crew, working members of the space community, and the few “hardcore Trekkies” who could afford the $100 admission price—filled the museum.  The film was the first major Hollywood adaptation of a television series that had been off the air for nearly a decade to retain its original principal cast.

The Motion Picture opened in North America on December 7, 1979, in 859 theaters and set a box office record for highest weekend gross, making $11,815,203 in its first weekend (generally considered to be a slow time for the movie business).  The film beat the record set by Superman (1978), which had opened in a similar number of theaters but had been released in late December—a busier time.  The Motion Picture earned $17 million within a week.  At its widest domestic distribution, the film was shown in 1,002 theaters; it grossed $82,258,456 in the United States.  Overall, the film grossed $139 million worldwide.  The Motion Picture was nominated for three Academy Awards: Best Art Direction (Harold Michelson, Joseph R. Jennings, Leon Harris, John Vallone and Linda DeScenna), Best Visual Effects, and Best Original Score.

In the United States, The Motion Picture sold the most tickets of any film in the franchise until 2009’s Star Trek, and it remains the highest-grossing film of the franchise worldwide adjusted for inflation, but Paramount considered its gross disappointing compared to expectations and marketing.  The film’s budget had ballooned to $46 million, including costs incurred during Phase II production.  The studio faulted Roddenberry’s script rewrites and creative direction for the plodding pace and disappointing gross.  While the performance of The Motion Picture convinced the studio to back a (cheaper) sequel, Roddenberry was forced out of its creative control.  Harve Bennett and Nicholas Meyer would produce and direct Star Trek II: The Wrath of Khan, which received better reviews and continued the franchise.  With the successful revival of the Star Trek brand on the big screen setting an example, Hollywood increasingly turned to 1960’s television series for material.