In Star Trek VI: The Undiscovered Country, the Federation and the Klingon Empire engage in peace talks after an ecological disaster on a Klingon moon force the warmongering Klingons to the negotiation table. The Enterprise is ordered to escort the Klingon Chancellor to Earth, but while in route, a secret plan is undertaken to prevent the sides from ever engaging in peace talks. Now, will the Enterprise start a full scale war on the eve of galactic peace, or will they end wars…forever? 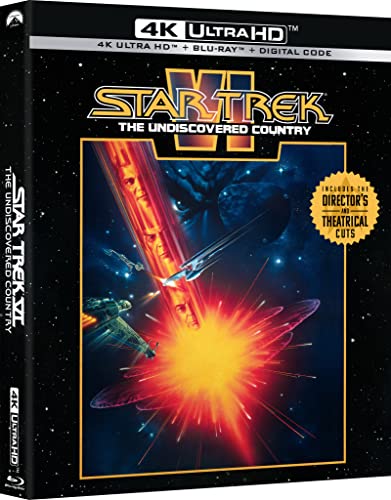 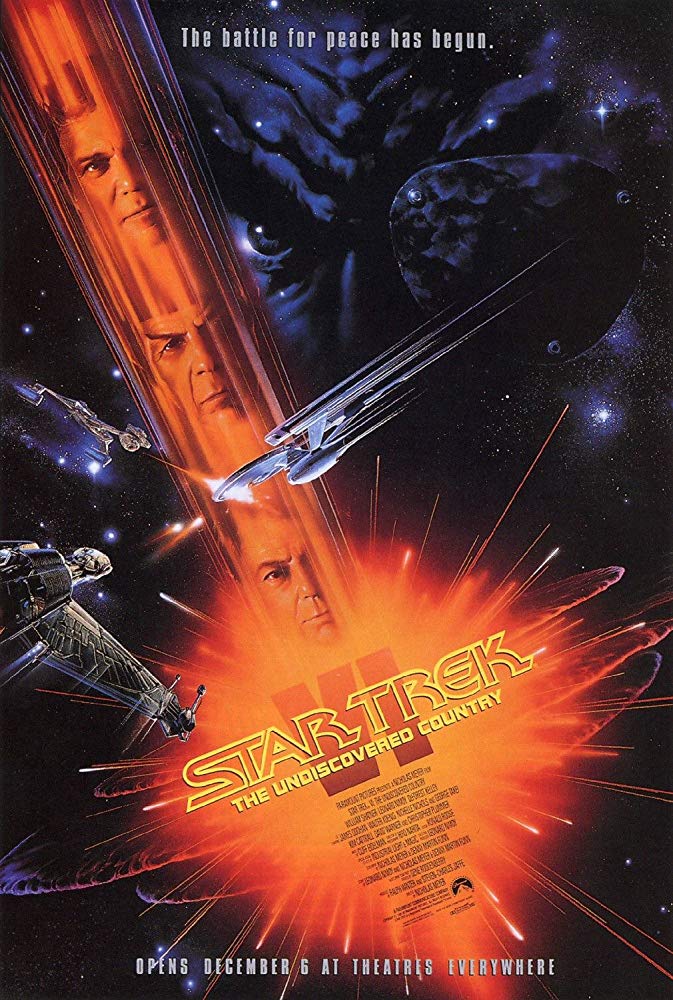 Star Trek VI: The Undiscovered Country begins when Praxis, a Klingon moon, explodes after the Klingons over mine the satellite in an attempt to keep up with the Federation in starship production. The resulting shockwave causes chaos and damage across the sector. The U.S.S. Excelsior, under the command of new Captain Hikaru Sulu (George Takei), is struck by the concussive wave and survives due to its crew’s quick reaction. Nevertheless, Sulu offers the Klingons assistance, but their offer to help is sharply declined.

Back at Starfleet headquarters, a special council is brought together to discuss the Klingon situation. Captain Spock (Leonard Nimoy) has reached out to the Klingons in attempt to create a lasting peace. A portion of the Klingon Empire wishes to sue for peace because the loss of Praxis and the destruction of the ozone layer on the Klingon home world have made it impossible for them to keep up their arms race with the Federation. However, there is a strong contention of the Empire that wishes for a military solution, preferring to die on their feet rather than on their knees.

Fortunately, Chancellor Gorkon (David Warner), the leader of the Klingons, wishes for peace. Captain James T. Kirk (William Shatner) is sent by the Federation Council to escort the Chancellor to peace talks in Federation space. Kirk does not trust the Klingons since a Klingon was responsible for the death of his son. He resents his assignment, and his disbelief in the prospects of peace is evident to everyone, including the Klingons when they are invited to a state dinner onboard the Enterprise.

That night, Kirk is awoken in the middle of the night by Spock who wishes to show him a mysterious gas emission that appears to be coming from the Enterprise. Suddenly, the Enterprise appears to fire two photon torpedoes at Gorkon’s ship while Spock is showing Kirk the scanner readings. The Klingon ship is adrift and loses it artificial gravity. Two figures wearing Starfleet spacesuits and magnetic boots beam aboard the Klingon ship and kills several Klingons and mortally wound Gorkon. The two men then return to a transporter and beam away.

Kirk surrenders the Enterprise rather than start a full scale war once the Klingon ship restores its systems. Kirk and Dr. Leonard McCoy (DeForest Kelley) beam aboard the Klingon ship in an attempt to provide assistance. McCoy is not able to save Gorkon, and General Chang (Christopher Plummer), Gorkon’s chief-of-staff, arrests both Kirk and McCoy for the murder of Gorkon. Gorkon’s daughter, Azetbur (Rosanna DeSoto) becomes the new chancellor and orders that the two humans face a Klingon trial, where they are convicted and sentenced to a life sentence on the frozen asteroid Rura Penthe.

However, Azetbur continues with her father’s quest for peace and resumes negotiations. The location of the peace conference is kept secret due to the assassination of Gorkon. The Federation President (Kurtwood Smith) also wishes for peace and refuses to engage in any rescue operation for Kirk and McCoy. The two prisoners arrive at the Klingon prison and are befriended by a shapeshifter named Martia (Iman).

Martia helps them escape the prison and gets the trio to the edge of the shield that prevents beaming. Meanwhile, Spock warps deep into Klingon space to save his friends. Kirk and McCoy discover that they have been betrayed by Martia who tells them that she was paid to let them escape so they could be killed. Kirk and McCoy are beamed safely away before they can learn who wanted them killed.

Once on board the Enterprise, Spock informs Kirk of his investigation into the assassination. Spock tells Kirk that two crew members beamed from the Enterprise to Gorkon’s ship and committed the assassination. Spock also informs him that they have inventoried the entire compliment of torpedoes and the Enterprise did not fire the torpedoes that disabled Gorkon’s ship. Thus, the only explanation left is that a Klingon Bird-of-Prey that can fire when cloaked must have fired the torpedoes. They find the two dead assassins, apparently killed by a third co-conspirator.

However, Kirk and Spock create a ruse to smoke out the assassins’ accomplice. They discover that Spock’s protégé, Valeris (Kim Cattrall), is the killer of the assassins. Spock does a forced mind-meld upon Valeris to discover the identity of the remaining conspirators, General Chang, Starfleet Admiral Cartwright (Brock Peters), and the Romulan Ambassador.

Kirk is informed of the location of the peace talks on Khitomer from Sulu on the Excelsior, and both captains race their ships to the peace planet to stop the next assassination attempt. The Enterprise arrives first, but before they can get close enough to the planet to beam down a rescue team, they are attacked by Chang in the cloaked Bird-of-Prey. The Enterprise suffers serious damage, and even the timely arrival of the Excelsior only spreads the damage to two ships. Lieutenant Nyoto Uhura (Nichelle Nichols) suggests that they use specialized equipment to track anomalous gases, and Spock and McCoy make a modified torpedo. The Enterprise launches the torpedo which hits Chang’s ship, making the Klingon ship visible. Both the Enterprise and the Excelsior bombard the ship with torpedoes, destroying the prototype Bird-of-Prey.

Kirk and his crew beam down to the planet and save the Federation President from assassination. Kirk acknowledges his prejudice and doubts about the peace talks to Azetbur, which appears to make the first step to a lasting peace. The Enterprise is ordered back to Earth to be decommissioned after the crew is back onboard. Spock makes the unemotional suggestion that they respond “go to hell” and Kirk orders a course for “the second star to the right, and straight on ‘til morning.” The Enterprise gets started on its final cruise.