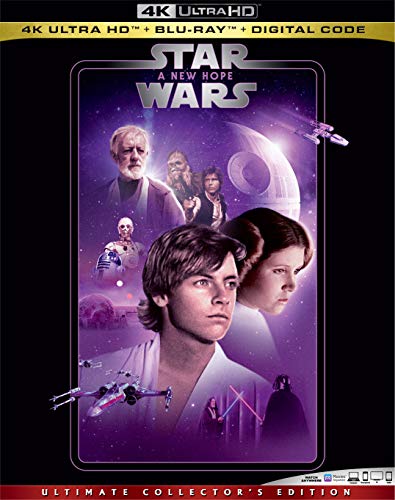 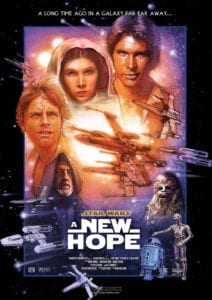 Star Wars begins as a small rebel blockade runner attempts to flee from a gigantic Imperial Star Destroyer. Unsuccessful, Stormtroopers board the rebel ship, which is under control of the Sith Lord, Darth Vader. At this point Vader is the epitome of villainy in the Star Wars universe, and not some misdirected lover who hates sand because it gets everywhere. That dark side turn is best left for the prequels, and not the original.

Vader is in hot pursuit of the stolen plans to Death Star; a moon-sized space station that lays waste to entire worlds. Princess/Senator/Badass, Leia Organa of Alderaan now has those plans she’s trying to get them to the Rebel Alliance when the Empire attacks her ship.

She hides the plans into a droid named R2-D2, and he escapes to deliver the plans to the Jedi Knight in hiding, Obi-Wan Kenobi. The Jedi use the power of the Force for good, but Vader and his Emperor use it to kill all remaining Jedi they find alive. Obi-Wan is one of the few remaining Jedi left in the universe.

R2-D2, along with effeminate life-partner, C-3PO, escape via a pod down to the desert planet of Tatooine. Once there, Jawa scavengers capture the two droids, and sell them the family of Luke Skywalker. The teenage boy dreams of leaving his desert world, and fighting the Empire with his friends.

Soon, Obi-Wan finds Luke and the droids in the middle of the desert when R2 goes looking for him. Obi-Wan attempts to convince Luke to join him on the space adventure, but Luke reluctantly refuses so he can help his uncle with the upcoming harvest. He quickly reconsiders when Imperial Stormtroopers brutally murder his aunt and uncle.

The quartet next head to Mos Eisley, and hire smuggler Han Solo and his wookie, Chewbacca, to take them to Alderaan. Han, a former Imperial soldier, now smuggles anything to the highest bidder.

Han and Chewie fly the droids, Luke, and Obi-Wan off Tatooine, and to Alderaan. Unfortunately, Vader and his immediate supervisor, Governor Tarkin, destroy the planet before they arrive. They destroy it to set an example of the Empire’s power in a feeble attempt to get Leia to talk. While she steadfastly refuses to spill the intergalactic beans, her refusal results in the deaths of billions of people on the planet.

The Death Star captures Han’s ship on approach, and the wayward heroes then pose as Imperial Stormtroopers to avoid capture. They sneak around in an attempt to find a way off the deadly space station.

Obi-Wan separates from the group to turn off the tractor beam which will allow Han’s ship to leave. Han, Luke and Chewie find the Princess’ cell, and then head off to rescue her. R2 and C-3PO hold down the fort because nobody suspects the droids just hanging out.

The boys rescue the Princess, and the trio escape being crushed in the garbage disposal. They somehow avoid every single Imperial soldier on the space station, who are on high alert and looking for them. Obi-Wan then turns off the tractor beam before sacrificing himself to Vader’s lightsaber.

After a brief space battle with some TIE fighters, Han takes his ship to the moon of Yavin. Once there, he drops off Luke, Leia, and the droids; grabs his sizeable reward, and heads out before the Death Star arrives to blow the crap out of the planet. Leia and the rebels organize an attack to destroy the Death Star before it destroys them.

Luke joins a group of pilots whose goal is to blow up the lethal space station via it’s weak spot. Sending a torpedo down an exhaust port will cause a chain reaction that blows the space station to pieces.

Vader and his crew destroy nameless pilots in their assault; leaving Luke, Wedge, and Luke’s childhood friend Biggs to complete the mission. During their attack run, Wedge ducks out, and a TIE fighter kills Biggs. R2 takes a shot to the head on their run too. This leaves Luke to take on Vader and two other TIE fighters himself.

Before you can scream cliffhanger, Han and Chewie return—shooting one TIE fighter which careens uncontrollably into the second one—destroying both. The resulting explosion sends Vader spinning off into space. Luke launches his torpedo with a little guidance from the Force, and the Death Star goes BOOM!

The movie ends with a medal ceremony where Luke and Han receive medallions for their heroic efforts. We see the prejudice of the universe as the lone non-human character, Chewbacca, fails to receive recognition for his efforts in the film.