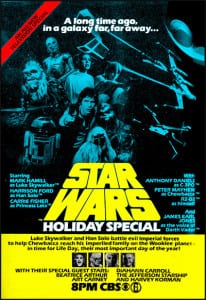 1978’s Star Wars Holiday Special begins with the best of intentions after the destruction of the DEATH STAR. We find two of our favorite characters, Han Solo and Chewbacca, racing from Imperial Star Destroyers—just like they did on the big screen.

Han still has a few moves left in him, and all seems to be going well, but in an instant, things turn sour. Harrison Ford is barely able to choke out his first line; “You’ll be celebrating Life Day before you know it.”

A spectacular pre-title sequence rolls across the screen before jumping to Chewbacca’s home world of Kashyyyk. His abode is not the jungle tree house that we’ve imagined over the years. It’s a funkadelic 70s home straight out of the Brady Bunch. We soon meet Chewbacca’s wife Malla, his father Itchy, and finally, his son, Lumpy.

As Maala argues with her son to take out the trash, she’s busy struggling to make a holiday meal for her family. Chewie invited that nerf herder, Han, at the last minute, and now she needs to cook that much more.

The family waits anxiously for Chewbacca’s return home for Life Day as it’s apparently a very important holiday for wookies. Unfortunately, due to an Imperial blockade, Han and Chewie are late, so the fam decides to contact Luke, Leia, R2-D2 and C3PO to find them.

Throughout the show, we meet an array of variety show characters. There is Art Carney, the local trader and friend of the wookies who looks like he knows a few things about helping Itchy get his scratch on. Diane Carroll plays the holographic porn actress, and she entertains us with a down and dirty song. Doing his voodoo that he do so well is Harvey Korman. He plays three characters—each one a little worse and more racist than the last. If CBS would have only brought in Carol Burnett and Tim Conway to the show, the galactic possibilities would have been endless!

Hot off a one-song gig at the Mos Eisley Cantina is the Jefferson Starship as a washed-up hologram band. Finally, the seductive Beatrice Arthur puts her best Maude on as a bar owner on Tatooine. She sings us a stirring rendition of a well-known Huttese song for good measure.

The bulk of the story deals with a group of Imperials invading the Bacca home to find out any information on Chewie’s location. In time though, Han and Chewie make it back, and are able to quickly take out the Imperial stormtrooper guarding the entrance.

As soon as Chewie reunites with his family, Han leaves because he has a bad feeling about Carrie’s upcoming aria. This pisses off Maala who just spent all this time cooking extra food for this unwelcome half-wit—that’s Chewie’s dumb life debt; not hers. So Chewie must celebrating life day alone with his family.

We find that this exciting celebration involves wookies wearing long red robes, grabbing their man-parts, and hauling ass over to the space bridge to visit a glowing orb—this is why you say no to the disco biscuits, kids! Once at the aforementioned glowing orb, they find the Tree of Life where the wookie holiday celebration takes place.

Now is the perfect time for the rest of the Star Wars gang to inexplicably show up. Mark Hamill, with his girly-blond wig, and surgically-repaired face pays his respects. Carrie Fisher is there with her bagels erect on her head—just as the boys like them. Harrison Ford even comes back for one more scene. Yep, he’s going to listen to Carrie’s song after all. R2-D2 and C3PO are also there, because what religious ceremony would be complete without some godless robots rabbiting on about religion.

Our epic tale climaxes as Lucas drives Carrie Fisher to the verge of drug addiction when Princess Leia gives a wonderful a speech about the meaning of Life Day. She follows it up with an out-of-tune Life Day song about peace set to the Star Wars opening theme. Unfortunately, Bill Murry’s lounge singer did it much better on Saturday Night Live over on NBC.

In the end, you still don’t know what Life Day is, or what it has to do with Christmas, but Boba Fett does show up in an animated cartoon in the middle of the show. Sure, it doesn’t add any real value to the special, but is notable for being Fett’s first appearance in the Star Wars mythology. So the show has that going for it, which is nice.