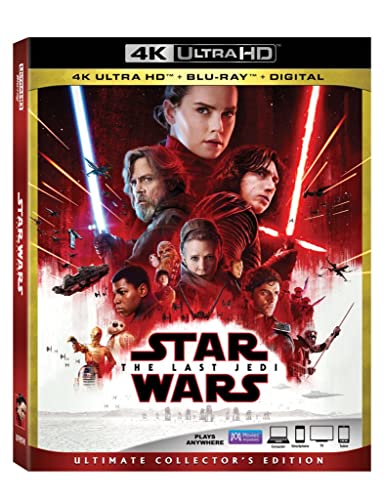 In The Last Jedi, General Leia Organa’s Resistance forces to flee D’Qar as the First Order fleet arrives. Poe Dameron leads a counterattack which destroys a First Order dreadnought, but is costly in Resistance lives. They manage to jump to hyperspace, but the First Order tracks them down and attacks. Kylo Ren, hesitates to fire on the lead Resistance ship after sensing his mother’s presence, but his wing-men destroy the bridge anyhow.

Most of the Resistance leaders die and Leia is launched into space. With the force as her ally, she survives. Poe disapproves of their new leader, Vice Admiral Holdo’s passive strategy. He heads out to help Finn, BB-8, and mechanic Rose Tico on a secret mission to disable the First Order’s tracking device. Unfortunately for Snoke, everything is not proceeding as he’s foreseen it.

Read the full summary, and listen to part one and part two of our One with the Force film review.