In the distant future, the Earth is at war with a race of giant alien insects. Little is known about the Bugs except that they are intent on the eradication of all human life. But there was a time before the war… A Mobile Infantry travels to distant alien planets to take the war to the Bugs. They are a ruthless enemy with only one mission: Survival of their species no matter what the cost. 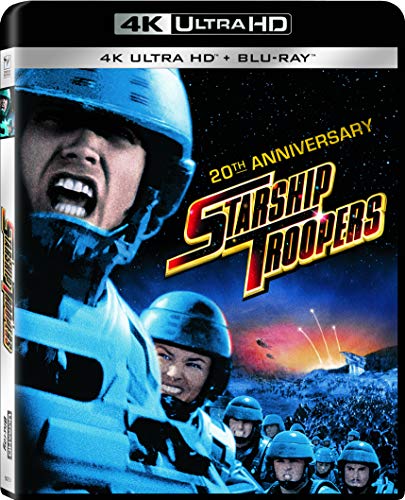 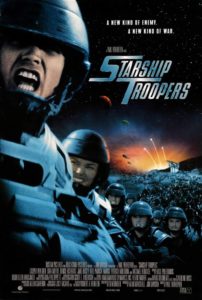 Out in the 23rd century, humanity finds itself in a conflict with a species of hostile Arachnids while out in space colonizing new planets. These “Bugs” don’t have technology as humanity knows it, but they are very efficient killers who will stop at nothing to protect their planet from human colonization.

On the planet Earth, the United Citizen Federation governs humanity, but not everyone is a citizen of it. Military service is one way to become a citizen which then affords humans basic rights. In Buenos Aires, high school students John “Johnny” Rico (Casper Van Dien), his girlfriend Carmen Ibáñez (Denise Richards), and their psychic friend, Carl Jenkins (Neil Patrick Harris), graduate before enlisting in the military.

Rico’s parents disapprove; wanting their son to go to Harvard. Carmen has dreams of piloting a spaceship, while Carl joins Military Intelligence. Rico only joins to be with Carmen but the Federation sends him to the Mobile Infantry. Another classmate of theirs, Isabelle “Dizzy” Flores (Dina Meyer), who has the biggest crush on Rico, soon transfers to his squad. Career Sergeant Zim (Clancy Brown) trains the new recruits.

It’s during this time that Rico becomes squad leader and befriends fellow cadet Ace Levy (Jake Busey). Unfortunately for Rico, Carmen soon breaks up with him via a recorded message because she wants to be a career officer. Unbeknownst to Rico, Carmen now serves under his high-school rival, Zander Barcalow (Patrick Muldoon).

One day while training in a live-fire exercise, an accident kills one of Rico’s squad members, causing another one to quit from guilt. The Federation gives Rico 10 lashes for the failure and demotes him. He then resigns, not thinking he can cut it. However, during a call to his parents, an asteroid, which the Bugs had secretly launched at Earth, hits the planet, destroying Buenos Aires. It kills his parents and millions of others too. Rico rescinds his resignation and rejoins his fellow recruits.

The Arachnids’ home planet is called Klendathu, and the Federation sends an invasion force to destroy them. However, the operation has severely underestimated the Bug’s defensive capabilities and the invasion fails miserably. They nearly kill Rico, but someone saves him. Carmen learvs via an incorrect report that Rico was killed in action.

Once Rico recovers, the Federation reassigns him, Ace, and Dizzy to the Roughnecks. They are an elite unit commanded by Lt. Jean Rasczak (Michael Ironside)—Rico’s former high-school teacher. During their first outing with the Roughnecks, Rico gains the respect of his peers when he destroys a tanker Bug singlehandedly. The Lieutenant promotes him to the rank of Corporal for his efforts. Meanwhile, his relationship with Dizzy comes to a head when the two have sex during a nights layover on Tango Urilla.

The love fest comes to a quick close when the Roughnecks respond to a distress call from Planet “P”. They arrive to find the outpost destroyed and a trap waiting for them. The Bugs quickly swarm the outpost Alamo style. When the Lieutenant finds himself cut in half from a tanker bug bite, Rico, now an acting sergeant, euthanizes him. Carmen and Zander respond to their outpost’s distress call and Carmen pilots a ship in to rescue the remaining soldiers. As they evacuate, a Bug kills Dizzy.

Back on the main ship, the remaining Roughnecks give Dizzy a proper burial into space. Rico and Carmen meet up with Carl, who is now a high-ranking intelligence officer. He has reason to believe an intelligent “Brain Bug” is in charge of the other Bugs and is actively learning how to fight humans. He promotes Rico to lieutenant and gives him command of the remaining Roughnecks. He then orders Rico to send the Mobile Infantry back to “P” to capture the Brain Bug.

As the fleet tries to land troops on the planet, the Bugs fling projectiles at it and they destroy Carmen’s ship. Carmen and Zander manage to escape via an escape pod, but it crashes into a Bug tunnel system near Rico’s squad. Carmen does manage to contact Rico via radio to request help.

Before they arrive to rescue the two, the Bugs surround Carmen and Zander. A Brain Bug arrives and uses its proboscis to pierce Zander’s skull, sucking out his brain. As it turns to do the same to Carmen, she cuts off its proboscis with a knife. Rico, Sugar Watkins (Seth Gilliam), and Ace arrive with a small nuclear bomb, which the Brain Bug recognizes as a direct threat. The Brain Bug retreats as its minions swarm the escape party. When they mortally wound Watkins, he sacrifices himself to detonate the bomb, allowing the others to escape.

Once they make it back to the surface, they find the soldiers celebrating. Their former Sergeant Zim, who requested a demotion to private so that he could serve at the front, captured the Brain Bug during the melee. Carl arrives to read the Brain Bug’s mind. He tells everyone that the Bug is afraid and everyone rejoices.

The film ends with a propaganda clip which shows Carmen, Ace, and Rico as model servicemen and women and it encourages viewers to enlist in the armed forces.