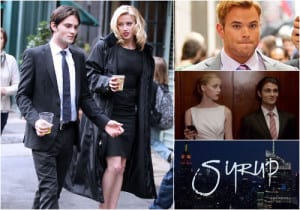 Magnolia Pictures has released the first trailer for Syrup. The film is directed by Aram Rappaport and is based on a novel by Max Berry with a screenplay by Rappaport and Barry. The film stars Brittany Snow, Amber Heard, Shiloh Fernandez, Kellan Lutz, Rachel Dratch, and Michael Teh. Syrup is tentatively scheduled for release sometime later in 2013.

In this dramatic comedy, a slacker hatches a million-dollar idea. But, in order to see it through, he has to learn to trust his attractive corporate counterpart.