When four turtles come into contact with a mysterious ooze in the sewers of New York, they mutate into intelligent pizza-loving humanoids. A wise rat named Splinter finds and mentors them in the art of ninja combat. When the evil Shredder attempts world domination, the turtles jump into action to stop him. 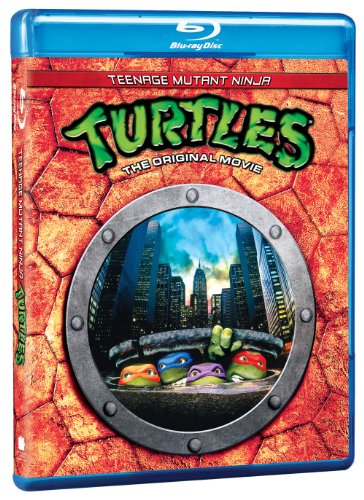 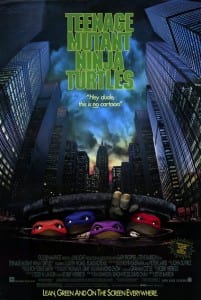 A mysterious new gang has moved into New York City with one thing in mind…to pillage, pillage, pillage; loot, loot, loot, and intrepid news reporter, April O’Neil has made it her duty to uncover the person or persons behind the series of robberies, but nobody got time to get a good look at the little buggers, and there are very few clues.

One night, after work, Ms. O’Neil stumbles upon a group of teens stealing ghetto blasters, boom boxes, and bubble gum from the back of a building. When she is spotted by the boys, they try to Jackie Chan her ass, but before they can touch her lovely lady humps, four stealthy figures poke their turtle heads out from the urban abyss. They make quick work of the thieves and tie them up before you can say, “Totally tubular, dude!” Our four heroes quickly flee down into the sewer before anyone can take notice, but Raphael forgets to pick up his sai as he exits stage left. April O’Neil steals Raphael’s weapon, and puts it in her purse for safe keeping.

Our heroes take a victory lap home to Splinter’s rats nest, but once there, Splinter doesn’t join in their celebration. Instead, he scolds his little green pupils on not taking their training seriously enough, and reminds them of their duty as ninjas, but they are too busy ordering pizza to hear what their master is saying.

Raphael decides goes to see the movie “Critters” alone, and rub one out in the safety of the Paul Reubens Family Theater, but on his way home, he witnesses some purse snatchers attack a little old lady, and he rushes off to save the day. He flashes his last sai at the thieves, and they take off, but our little green friend isn’t the only hero in the park tonight. Ex hockey puck and current pain instructor, Casey Jones, is about to teach everyone a little Pain 101. He jumps the fleeing men, and knocks them to the ground.

With a flash of razzle dazzle, he sends the men to the penalty box, but before he can finish them off, Raphael stops him, and the thieves escape. Casey Jones is pissed someone has interrupted his class, and decides to wield his vigilante justice on Raphael. After an epic battle, Raphael loses, and Jones runs off, but not before calling Raphael a freak. Raphael looses his cool and takes chase, but can’t catch up. You try running in a half shell!

The next day, April O’Neil’s boss, Charles Pennington, makes a creepy visit to her apartment for some hot-off-the-press morning boning, but instead, April tells him about being attacked the previous night. She then heads off to grill the stereotypical New York Police Chief, Sterns, on the city’s crime spree. The stealthy Raphael sees her interview with the chief on TV, and heads out to get his sai back from her.

He catches up to April at subway station, only to find her surrounded by a group of hooded men known as the “Foot”. Before they can to pounce on her, Raphael snatches his other sai from April and stomps on her attackers. Of course, Ms. O’Neil is out cold by the end of the fight, so Raphael takes her home to Turtle HQ.

April wakes up, and hilariously freaks the fuck out! Once Splinter’s “Jedi mind control” calms her ginger ass down, he tells her the turtle’s origin story, but she is not the only on listening in. Members of the Foot have followed Raphael home, and hear everything too. Leonardo, Michelangelo, Donatello and Raphael decide to all escort Ms. O’Neil back to her apartment, and have some pizza.

It’s all fun and games until someone gets hurt, and upon their return to Turtle HQ, they find their home has been ransacked and Splinter is gone, but instead of looking for clues, the turtles return back to April O’Neil’s apartment, and wait to hear the good word about Master Splinter.

Meanwhile, in another part of town, Police Chief Sterns, calls up Ms. O’Neil’s boss, the sexy Charles Pennington, and tells him that he has his juvenile-delinquent son, Danny, in custody. He uses Danny to blackmail Charles into getting April O’Neil off his back. Pennington acquiesces, and heads off to April’s apartment, with Danny in tow, to tell her to chill out on the chief.

The turtles hide in April’s apartment as the two arrive, but Danny spots Michelangelo through a mirror. Once they leave April’s, Danny jumps out of his dad’s car and runs away. He heads off to his new family at the Foot’s hideout. There, Shredder, the evil leader of the Foot, addresses his gang of boys, and tells them he wants some turtle soup for dinner. Danny spills the green beans, and tells him where the Fab Four are hiding.

Meanwhile, in another, another part of town, Ms. O’Neil rags on police Chief Sterns for the last time, and it gets her little ass fired. Her boss leaves a message on her answering machine to deliver the news, but she doesn’t hear it as she’s hiding from the Foot who have attacked the Turtles in her home. To make things worse, the building she lives in, which also houses an antique store she owns, goes up in flames from the battle. Vigilante/Heart Throb Casey Jones, oddly enough, lives around the corner, and witnesses the entire fight from his balcony. He comes to the rescue of Ms. O’Neil and the turtles before the whole thing gets consumed by the fire, and they all escape.

Ms. O’Neil has Casey Jones drive to her farmhouse in the country so that everyone can recover from the big fight…especially Raphael who was thrown through a rooftop skylight. Eventually, the four turtles begin training to take out the Foot and get their master back. Casey Jones uses this time to put his best moves on Ms. O’Neil. He might be a Professor of Pain, but he’s not even close to earning a Ph.D in L-O-V-E, but he’s in luck. His only competition for her comes from four green teens, and since April is a vegetarian, he has a chance.

On a fateful night, the turtles communicate telepathically with Master Splinter, and decide the time’s right to bring him home. They head back to Turtle HQ, and prepare for their castle onslaught. Danny has found the location of Turtle HQ in their absence, and has been staying there. Casey is able to follow Danny back to the Foot HQ, and manages to get in a fight with Tatsu; Shredder’s second in command. Casey kills Tatsu, and then frees Splinter. They head back to help the turtles, who are in the midst of raising some shell against the Foot.

They stomp out the Foot, but Shredder has come to town. He opens up a can of oriental whoop ass on his green nemeses on a darkened rooftop. Shredder convinces the turtles to throw their weapons down to save Leonardo, whom he is about to kill. A reenergized Splinter shows up to save his pupils, and he reveals to Shredder that he was the rat who scratched his face all those years ago when Shredder killed his master in a fit of jealous rage.

Mr. Hong Kong Phooey isn’t fazed by this revelation, and he charges Splinter, but like Bruce Leroy, Splinter got the glow, and he throws Shredder over the side of the building where he falls to his death in the back of a garbage truck. Casey Jones turns on the truck’s crusher for good measure, and Shredder is no more. Hollywood gets its happy ending as April O’Neil is hired back to report on the evening’s events. Casey Jones gives her a passionate kiss as Shredder’s bones crackle like fireworks in the background. The turtles are reunited with their master, and Splinter “makes a funny” to close out the film – Cowabunga, Dudes!