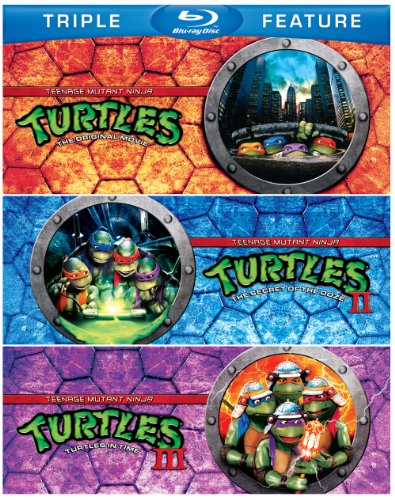 When four turtles come into contact with a mysterious ooze in the sewers of New York, they mutate into intelligent pizza-loving humanoids. A wise rat named Splinter finds and mentors them in the art of ninja combat. When the evil Shredder attempts world domination, the turtles jump into action to stop him.

The Ooze is the substance that mutated the turtles, and eventually the boys find out where it came from. Unfortunately Shredder learns about it too. When he uses it to upgrade his own abilities, the turtles must set out again to stop him.

When a magic scepter accidentally sends April back in time to 17th Century Japan, the boys take-off in hot pursuit. Once there, must battle the evil Lord Norinaga to reclaim a magic scepter that can bring them back to their beloved subways of New York City.

Disclaimer: This post contains affiliate links. This means when you click a link, and purchase an item, Movie House Memories will receive an affiliate commission. Advertisers and Affiliate Partnerships do not influence our content. See our Terms of Use about the inclusion of affiliate links on this site for more information.
May 3, 2020
1 minute read
Show More
Back to top button
Close
Close